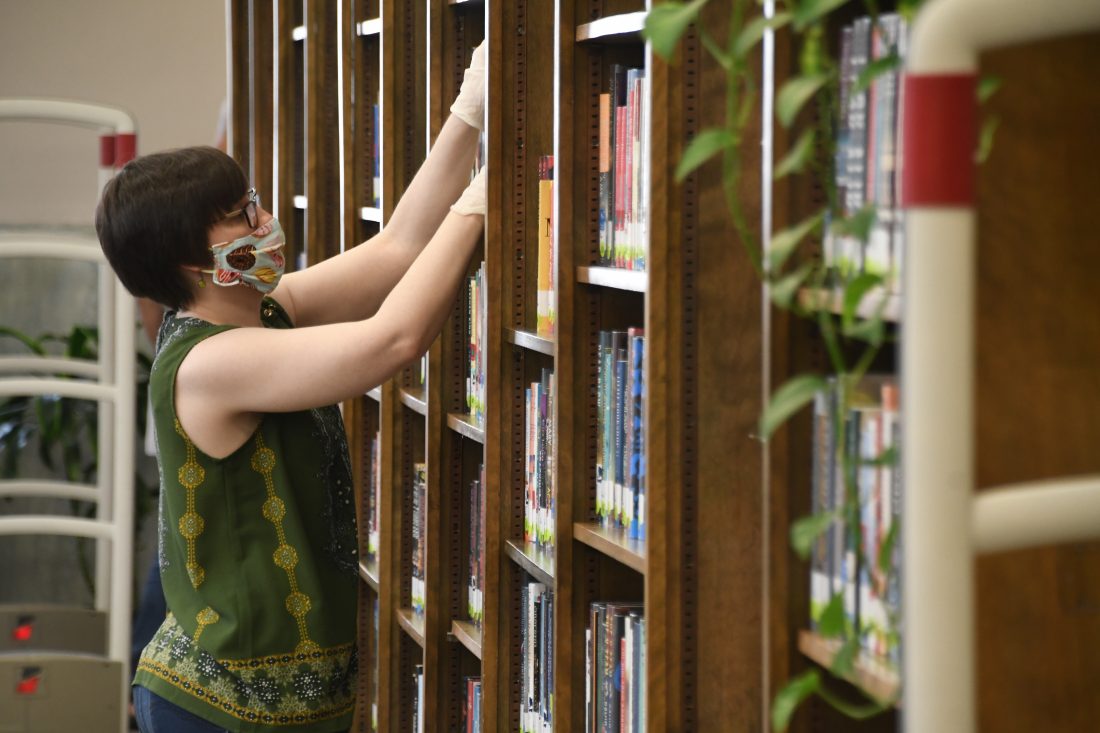 MARK NANCE/Sun-Gazette Melissa Vollman places books back on the shelf in the main circulation room at the James V. Brown Library Monday.

The James V. Brown Library is now open for browsing in all areas of the facility, including the children’s and teen areas. In addition, all other help desk services, such as printing, scanning, copying, genealogy requests and stamps will also be open.

Passport services are expected to be available by appointment only beginning Monday although the Friends Book Store remains closed.

“People have been communicating with us and we’ve been trying to have some surveys so we can see what people need, and browsing is dearly missed,” said Barbara S. McGary, executive director at the library, about the reopening of that service.

All patrons must wear a mask or a face covering in order to enter the library or to pick up holds.

“It’s really important for everyone to wear a mask for the safety of other patrons and our staff,” McGary stressed.

The pick-up holds program that has been available will continue at the desk located inside the Market Street door for those people who are interested in having limited personal contact, she added.

The computer area, which is heavily used by the public, has been rearranged to allow for physical distancing between the computers. In the previous stage, computers were available by appointment only.

“But, from now on it is first come, first served. We even have some teen computers open as well,” McGary said.

Although guidelines state that no more than 250 people can be in the library at one time, McGary noted that usually there are 500 patrons per day, not everyone is in the building at one time, so that is not an issue. Visitors to the building are asked to use the Edwin Street door and the Welch Wing to enter, although they may exit through any other open door.

Summer programs are in full swing and are conducted virtually, McGary said.

“Certainly the reach is pretty far when we offer it virtually because everyone that’s a part of our Facebook page is able to access the program. And, we have the ability to reach out to the community,” McGary said.

“I think our community is getting a little bit of fatigue from all the screens, but we have some really great programming this summer. The good thing is our main family programs, even though they are virtual, if our families can’t come to the live programs, they’re online for two weeks, so it’s whenever they can come afterwards,” she added.

Books and other materials being returned must be placed in the book drop located next to the Welch Wing door. This is the only book drop that will be open.

With the reopening of services, fees for DVDs have been reinstated. Patrons with fines are asked to clear their accounts at the help desk.

When the shutdown began, the library had been conducting their Bookmobile Campaign to replace the current Bookmobile. McGary noted that because of the pandemic there will be no opportunities for the library to apply for competitive grants for the project. She added that the library has raised $126,000 for the campaign.

In conjunction with the Bookmobile, McGary said, “We’re hoping once a vaccine is developed and distributed we’ll be able to go back out to senior care facilities, but of course that’s on hold until then.”

The library’s gala, its main fundraiser, was also canceled this year, but McGary noted that they are working on some ideas to connect with the public.

The library released a statement, which said staff will continue to clean and sanitize areas frequently. Returned materials will be quarantined for 72 hours. Plexiglass shields have also been installed in front of all desks.