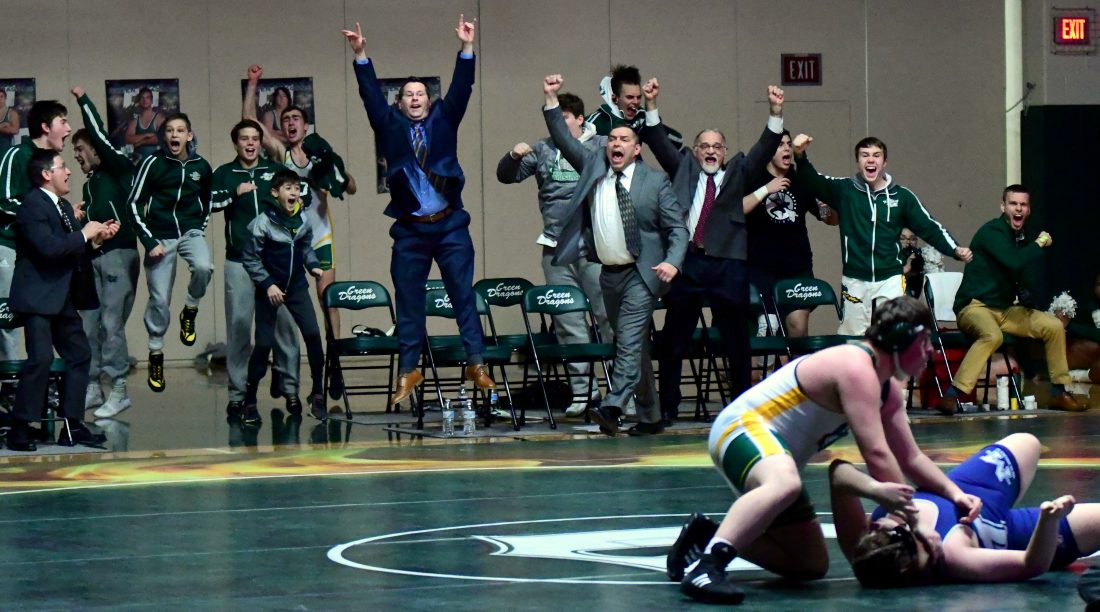 Referee Mike Millward could sense something was up. Gyms, even those stuffed to the brim as Lewisburg’s was, very rarely become ear-splittingly loud for an exhibition match.

To his right, the Hall of Fame official could see every person on the Lewisburg bench celebrating in some manner. Assistant coach Justin Michaels jumped high enough to wonder if maybe he should have been a basketball player. Roman Aksenov was so jubilant in his reaction his hair stood on end. The usually mild-mannered and stoic assistant coach Mike Brown couldn’t help but throw up both arms as he let out a howl.

Millward looked at Lewisburg’s Anthony Hibbert and asked the senior if it was his first win. After answering yes, Millward raised Hibbert’s hand to the scorer’s table and then spun him around and raised his hand in the direction of the other half of the gym as he would in the finals of the state tournament.

Hibbert returned to the bench to pure pandemonium. On a night in which Lewisburg celebrated the contributions of a quarter century to the program by coach Jim Snyder and Brown, who were about to coach their final dual meet, Hibbert stole the show and gave his coaches one more lasting memory. Not even a three-point loss to rival Mifflinburg could dampen the moment of Hibbert scoring a fall in the only match of his high school career.

“I totally believe in the family aspect of Lewisburg wrestling,” Snyder said. “There you have an exhibition match with a kid who has never wrestled before, and those kids could not have been happier. And they’re happy because it’s Hibb and what he’s done for the team. That moment is why I coach.”

Hibbert returned to wrestling prior to the 2017-2018 season. He had wrestled as a eighth and ninth grader but gave up the sport as a sophomore. His main sport has always been lacrosse and he dabbled in football, basketball and wrestling in the past. But as a sophomore, Hibbert didn’t get the kind of playing time he had hoped for on the varsity lacrosse team.

He had given up basketball in eighth grade because he felt he had become too big for the sport. His size was one of the reasons he didn’t get the playing time he hoped for on the lacrosse field as well. He visited Brown, a family phsyician known around Lewisburg simply as Doc, following his sophomore year and found out he was weighing 295 pounds with blood pressure through the roof.

Brown encouraged Hibbert to join the wrestling team to work on controlling his weight and his health in general. Hibbert did just that, but with the condition that he’d never have to wrestle a match. Hibbert was in it for the conditioning alone. He was so disinterested in actually competing, he didn’t wear a singlet to matches. Instead, he stayed in his street clothes and ran the video camera for the coaches.

That was Hibbert’s life during wrestling season. He went to practice every day, sometimes kicking and screaming, with the sole intention of getting in better shape for the spring lacrosse season. There were days he’d tell teammate Dakotah Snyder during the school day that he was going home and there was no way he could go to practice that day. Then he’d find himself lacing up his wrestling shoes knowing he had to do whatever he could to help his practice partners get better.

“There were a lot of times I thought about quitting,” Hibbert said. “But for how much I complained about practice and hated going at times, it made me a better person and put me in the best shape of my life.”

Hibbert accomplished his goal by joining the wrestling team. He was down to 235 pounds by the end of his junior season and it led to a strong lacrosse season as a defenseman. This year, he reached his goal of getting to 220 pounds.

Along the way, Snyder and upper-weight coach Andrew Wagner encouraged him to get on the mat for an exhibition match here or there. They never pushed Hibbert, they only made it a suggestion as a way to reward himself for doing the work and losing the weight. But each time they would be met with the response he was there only to lose the weight.

That thought process continued for Hibbert for the better part of two years. It wasn’t until the District 4 Duals tournament two weeks ago Hibbert came to Snyder and said he noticed Mifflinburg had an extra wrestler at 220 or 285 pounds, and if Snyder could make it happen on senior night, he wouldn’t mind wrestling.

Snyder promised he would do his best to make it happen. Mifflinburg coach Derek Reber won a state championship for Snyder at Lewisburg in 2008 and is the only four-time state placewinner in school history. So if there was anyone who could work with Snyder to get an exhibition match for one of his kids, Reber was a good bet.

Hibbert went as far as to tell his mother, Marylynn, he might have a match on senior night. He had always discouraged her from coming to his matches because all he was going to do was sit on the bench and run the video camera. This was a little different though. First, he was going to be honored with Lewisburg’s other 10 seniors prior to the dual. And although he wasn’t certain, he thought there was a good chance he’d wrestle for the first time since eighth grade.

An anxious Lewisburg wrestling team glared a hole through Snyder in the locker room prior to the dual. Snyder was going through his usual pre-match routine of a pep talk and announcing which wrestlers had exhibition matches.

“Ethan, you have a match,” Snyder said to senior Ethan Daniels.

A smattering of applause broke out from the team to encourage Daniels. Then their eyes quickly fixated on Snyder again. The coach, preparing for the 533rd and final dual-meet of his 24-year career, paused to let the anticipation build among his team.

“Bobby Sena, you have a match,” Snyder said as the team again encouraged another of its 11 seniors.

And that was it. Snyder stopped speaking and walked away from his spot in front of the team. He left the Green Dragons feeling a little empty and confused.

A few seconds later Snyder poked his head back in front of the team.

“Hibb, you got one,” he said setting off the first of two explosions of excitement that night for Hibbert.

Then the butterflies started. As he paced behind the Lewisburg bench during Daniels’ and Sena’s matches, Hibbert thought he was going to throw up. He hadn’t felt like that in 5 years.

When he got on the mat, things didn’t do as planned. Wrestling an opponent who outweighed him by about 50 pounds, Hibbert was caught in a headlock off the whistle. It wasn’t exactly an ideal start, but Hibbert had been in that spot before.

Lewisburg heavyweight starter Grant Adams is about 270 pounds and has often hit Hibbert in a headlock at practice. Hibbert knew his job was to try and roll through, something he wasn’t always able to do against Adams, a 20-win wrestler. But in this moment, he found the adrenaline and the strength to do just that.

Hibbert found himself on top, in control, and squeezing to get the fall. The crowd in the gym was losing its collective mind and the student section was chanting his name. Then Millward slapped the mat and all hell broke loose on the Lewisburg bench.

“I thought I was done then and there when I got caught in the headlock,” Hibbert said. “Halfway through, I felt the momentum coming and I went with it. I threw my whole body into it and I ended up on top of him. I watch the video now and I still don’t know how it worked. It never worked in practice.”

“His biggest fear was going out there and letting everybody down,” Wagner said. “But he showed right there just how far he’s come in the last few years. He’s been such a team player buying in to what we were teaching. He had his good days and his bad days and he would question ‘why am I even here?’ I think that moment made it all worth it.”

Snyder offered a bear hug for Hibbert as he walked off the mat, but Hibbert squeezed harder than Snyder did, cracking Snyder’s back. For all Snyder cared, the night could have ended right there because the result of the dual meet had become inconsequential. The joy he felt was something he couldn’t describe, which is a big deal for a man who is never short on words and never short on light-hearted jokes.

Hibbert still has never wrestled a varsity match. His career record remains 0-0. But try to tell anybody in attendance that Thursday night Hibbert’s win didn’t matter. The culmination of two years’ worth of work led to one glorious moment shared by a wrestler who will never step on the mat again, a coaching staff on its way out the door after a quarter century of dedication to the program, and a gym full of onlookers who recognized the power of the moment as it unfolded in front of them.

“When we got together after the match, I spoke to the guys about my appreciation of all of them,” Snyder said. “But I will be taking, along with many others, that memory with me to my grave.” 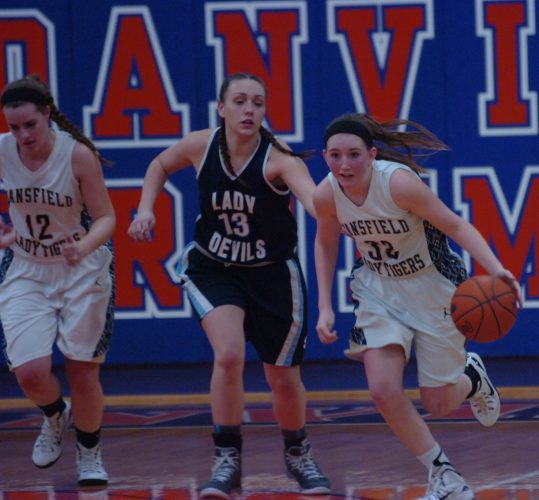 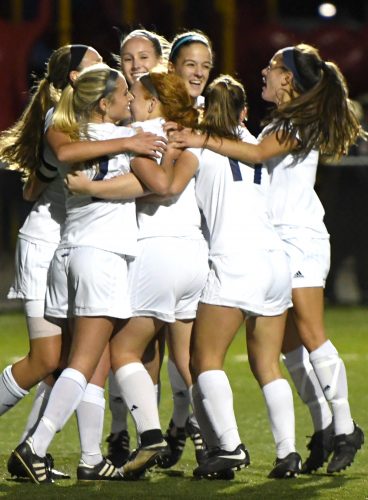 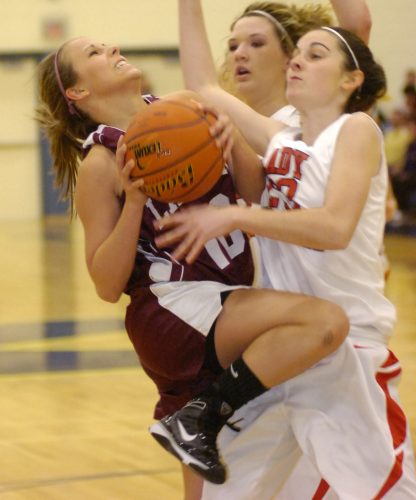 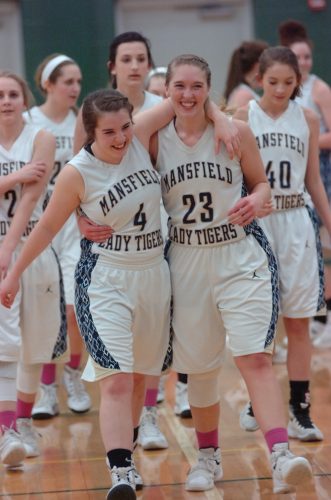 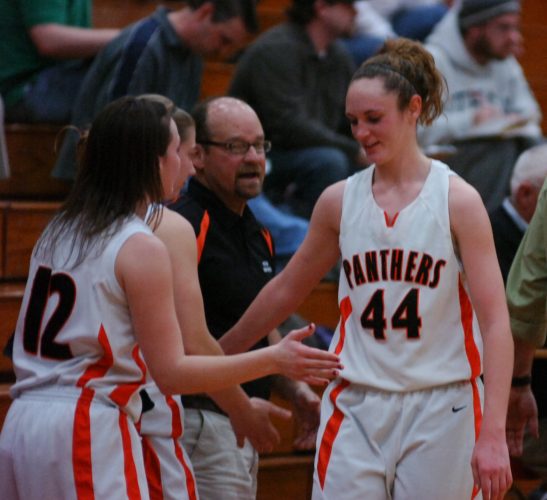