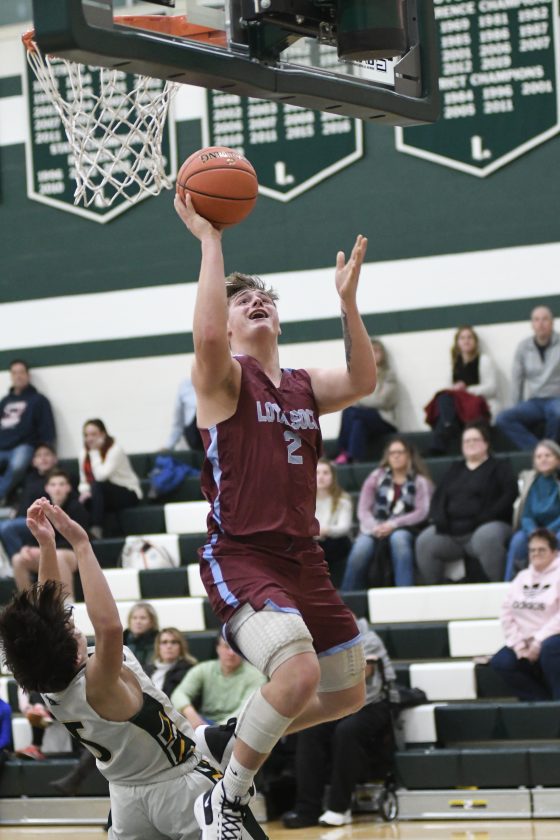 MARN NANCE/Sun-Gazette Loyalsock’s Aiden Gair (2) shoots over Lewisburg’s Cam Michaels (5) after a steal and fastbreak in the third quarter at Lewisburg against Loyalsock on Friday.

Just imagine what he could have done if he was healthy. Gair played his entire junior season with a torn meniscus, although many did not know and even fewer could tell.

The good news for Loyalsock and the bad news for opponents is that Gair is healthy again. Now the senior leader is able to unleash his entire arsenal and he has done so in blitzkrieg fashion early this season.

Gair scored 22 points, grabbed five rebounds and added three assists Friday at Lewisburg, helping Loyalsock remain undefeated and win its HAC-II opener, 81-47. He also had plenty of help from his friends. Four players scored in double figures, Julian Wilson (14 points, 12 rebounds) recorded a double-double off the bench and every player coach Ron Insinger used made a nice impact as Loyalsock (3-0, 1-0) led from start to finish.

“I feel great now. I’m moving better than ever,” Gair said. “I could move a little bit last year, but this year I want to show people I can do it in all facets of the game and not just shoot the ball.”

He sure is off to a good start.

Gair was not happy with his performance last night, but he still put together a performance which would make most players envious. He is averaging 31.3 points through three games and is scoring in all ways. Try and take away Gair’s outside shot and he can blow by a defender off the dribble. Try and limit his perimeter touches and he can down low and post up defenders. The 6-foot-3, 210-pounder is not just quicker, but also stronger than last year, something he showed last fall when he collected 13 1/2 sacks and helped Loyalsock’s football team reach the district final.

Gair was not just playing through pain last season, but also was the team’s lone first-time starter. This time, he is the only returning starter and is doing a nice job setting a tone for a team playing with a collective chip on its shoulder. That chip looked like a boulder throughout last night’s game as Loyalsock broke things open in the second quarter before going into turbo mode in the third.

“I’m more mature this year,” Gair said. “I’m not just going to shoot 3s if it’s not there. I’m going to take it to the basket and try to get the easy buckets.”

“Aiden is strong so he has an inside presence now, too. He’s put on some muscle and he can play with the big boys,” Insinger said. “Tonight you saw him a couple times when he went to the well he had 2-3 guys hanging on him, but he could still finish where as last year he couldn’t do that.”

Loyalsock has a new look in terms of players this season, but its long-time formula is still working. This team is fast, deep and can put up points in a hurry. It can score lots of ways, including in transition, from the perimeter, inside and off relentless defense. Loyalsock did all that, producing at least 17 points in all four quarters, hitting 53.7 percent of its shots and receiving steady contributions throughout the rotation.

The Lancers led by nine after a quarter before Nick Shedleski (19 points, 7 rebounds) heated up and pulled Lewisburg (2-2, 0-1) within 21-17 early in the second. Six players scored in that second quarter as Loyalsock went up 36-24. The Lancers wasted little time, immediately delivering a knockout blow in the third, opening with 22-7 run that gave them a 27-point lead. It was different players flourishing at different times with Saraj Ali (14 points, 6 rebounds) scoring six points inside and Rees Watkins (11 points, 3 steals) adding seven more.

“There’s a fine line between our first guy and our 11th and 12th man. I’m just putting more and more trust in them that they’re going to do their job,” Insinger said. “It showed during the third and fourth quarter because our legs were a lot fresher than Lewisburg’s.”

Loyalsock guard Rivers Parrish started for St. John Neumann a year ago and helped the Knights reach the second round of the Class A state tournament. He helped set a good early tone last night and dropped the hammer on Lewisburg in the fourth, hitting consecutive 3-pointers after the Dragons had pulled within 23. Parrish also produced four rebounds, four assists and two steals.

Wilson showed how dangerous he can be as well. The 6-6 junior looks a lot different than the player who sometimes struggled on the JV team a year ago. Hard work is producing good results and Wilson was 7 of 10 from the field, pulling down seven of his 12 rebounds in the second half and also blocking a shot.

“I’m so happy for Julian. He’s been working hard all summer,” Gair said. “He didn’t do so hot in JV games last year, but he’s been working on his game and he’s playing pretty well right now.”