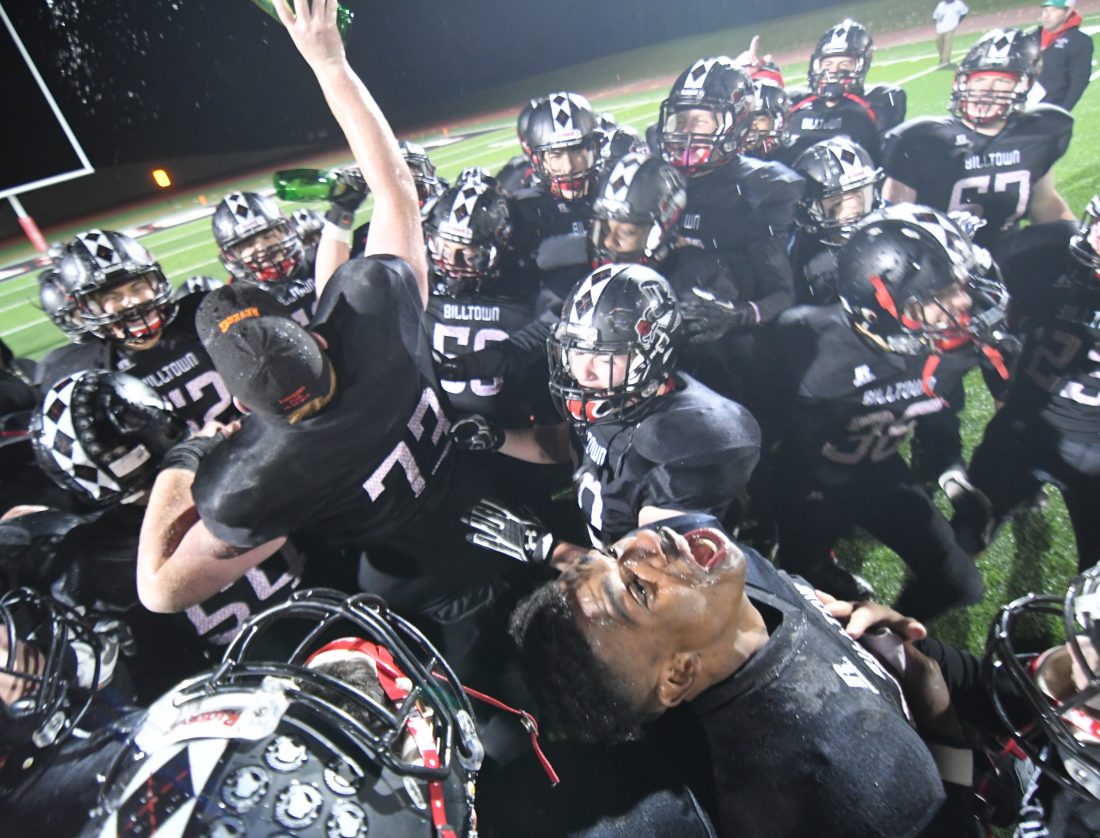 MARK NANCE/Sun-Gazette Williamsport players celebrate with one another after defeating Delaware Valley in the District 2-4 Class 6A championship game in 2016. That Millionaires’ squad finished an impressive 12-2.

Ask many diehard NFL fans who some of their favorite teams to watch over the last 30 years are and many will list the 1998 Vikings and 1999 Rams near the top. It was not just because both teams were great either. It was more because they produced points like an inquisitive child on a sugar rush produces questions.

And that is what made 2016 Williamsport so much fun. This was an offense featuring the kind of firepower which might make the Air Force blush. Every week was an offensive bonanza as Williamsport lit up the scoreboard like it was July 4th. The Millionaires averaged more than 50 points and 500 yards for much of the season, went 12-2, captured the program’s first district championship since 1995 and reached the Class 6A state quarterfinals.

The defense was pretty strong, too, especially late in the season and it took a college football team disguised as a high school team to finally end this remarkable season. This team also featured six all-staters, an area record. Add it all together and Williamsport earns the title of being the top football team of the 2010s.

All that came after Williamsport had been an area afterthought for so long.

The Millionaires experienced just two winning seasons from 2003-14 and went a combined 5-25 from 2012-14. Coach Chuck Crews, however, brought energy and dedication after coming from Chester in 2015 and the Millionaires started believing and producing. They turned things around in 2015, going 6-5 and reaching the playoffs for the first time since 2010.

That was just the appetizer. The main course came a year later and Williamsport feasted all year, romping to both Wyoming Valley Conference and District 2-4 Class 6A championships while leaving a lot of scorched earth beneath them.

“It means a lot. This is the first time we’ve experienced a season like this and got to go to the playoffs and it’s been a great run,” defensive end Keough Johnson said following a state tournament win against State College. “I have no words.”

Words were hard to come by when trying to describe Williamsport’s offensive machine. Quarterback Isaiah Hankins commanded an offense with more weapons than the Spanish Armada and produced one of the best all-around seasons in area history.

The senior all-state selection threw for a program-record 2,560 yards, 27 touchdowns and just our interceptions while also running for 919 yards and 14 touchdowns. It was the most total yards ever produced by an area quarterback and only one player has topped the 3,479 yards since then.

And that was just the start. This team featured both a 2,000-yard passer and 2,000-yard rusher. Future Minnesota recruit Treyson Potts showed off his Division I skills throughout this sophomore season, earning all-state honors after running for 2,016 yards and 34 touchdowns. He also caught 18 passes for 263 yards and two touchdowns.

Then there was the dynamic receiving core, a group that could make an outstanding 4×100 relay team. All-stater Elliott Walker caught 42 passes for 764 yards and a program-record 13 touchdowns. All-state tight end Jalen Jackson produced 32 catches and Dante Wright and Tristan combined for 42 catches and 911 yards. This offense was so deep that future all-state tight end Ethen Stryker and explosive receiver Marcus Simmons struggled to just see the field.

To put into perspective how head-spinning powerful this offense was consider this: Marty Clark — who had run for more than 3,500 yards in his two previous seasons at Loyalsock before moving to Williamsport — was a backup on this team. And he still ran for 613 yards and nine touchdowns while averaging 8.9 yards per carry. Oh yeah, Williamsport also punted just 20 times all season.

“I have so many weapons so it’s real easy. My line gives me time and I get the ball to our playmakers and they do the rest,” Hankins, the 2016 Sun-Gazette Player of the Year, said that season. “It’s a real team effort.”

Of course, the offense would not have been as powerful as it was without a stellar offensive line leading the way. The Millionaires certainly had that with two-time all-state selection Kurt Danneker anchoring a fabulous unit which included Tucker Kreisher, Chance Bower, Tyler Anderson and Eli Clary. Those five clicked in harmony and when they provided openings, the skill players cashed in, producing a parade of big plays.

“If we get a good surge we know they’re going,” Danneker, now a starter at Ohio, said following a 62-18 win against Scranton. “We just have to provide them the opportunity and I think our o-line has done a great job of that this year.”

Williamsport averaged 46.8 points and a 2000’s area-record 493 yards per game that season. Entering states, the Millionaires were averaging more than 50 points and 500 yards per game, best in the state. Williamsport scored at least 35 points in each of its first 13 games, topped 40 points 10 times, including eight straight through districts, went over 50 points five times and topped 60 points three times. Included in those 50-point explosions was a 56-23 mercy-rule beatdown of Berwick at Crispin Field.

The defense faced some struggles, but regrouped and adjusted following a 49-42 Week 7 loss at Delaware Valley. Danneker was moved to defensive tackle and two-time all-state defensive end Ross Stebbins went into overdrive and the defense shined in three consecutive playoff wins. Williamsport collected 31 sacks and linebackers Jackson, Cam Dickey and Nathan Welch combined to make 217 combined tackles. Stebbins, Danneker, Johnson and Jamaire Burget were formidable up front and Walker, Potts, Hankins and Marcus Simmons were tough in the secondary. Special teams were a strength as well with so many game-changers available for returns and kicker Angelo Girardi drilling 80 extra points.

Every part of the Williamsport machine was functioning in high gear throughout districts. Williamsport easily disposed of Hazleton, 48-14 before setting its sights on revenge against Delaware Valley. This was expected to be a 15-round fight, but Williamsport landed several early haymakers and delivered the knockout blow by the third quarter. Delaware Valley was 10-1 and had allowed just 22 points in its previous four games, but it was the Michael Spinks to Williamsport’s Mike Tyson.

The Millionaires dominated all facts, inflicted the mercy rule, rolled up 517 yards and won, 55-21. For the first time in 21 years, Williamsport was a district champion.

“On the sideline, when the buzzer rang we said, ‘Who would have thought?’ Coming from 2-8 to 6-5 last year to 11-1 now and going to the state playoffs … it’s great,” Potts said afterward. “Coach Crews is the biggest part of that and the players have been working hard in the offseason and going hard and that’s what got us here.”

“Those boys and seniors came from 2-8 to now here they are district champions. They worked their behinds off and they deserve every accolade and praise they get,” Crews said. “This is the culmination of years of hard work and effort and everyone working together.”

That formula carried over into the next week when Williamsport made statewide noise and defeated perennial power State College, 35-28.

State College recovered two onside kicks and twice pulled within a touchdown in the second half, but the defense battered the quarterback and made a series of crucial stops as Williamsport put an exclamation point on its season.

A week later Pittsburgh Central Catholic, featuring eight Division I-bound players, ended Williamsport’s season, winning, 62-21. Williamsport, though, already had made its mark on area history. They were tough, unselfish, wildly entertaining and really, really good. In just two years they went from struggling to win multiple games to being one of the state’s top eight 6A teams.

There were so many great football teams last decade. But 2016 Williamsport is King of the Mountain.

“It shows how far a team, school and community have come together,” Hankins said following the district championship. “We went through everything you can as a football team. We went through adversity and trials and tribulations and we’re victorious.”