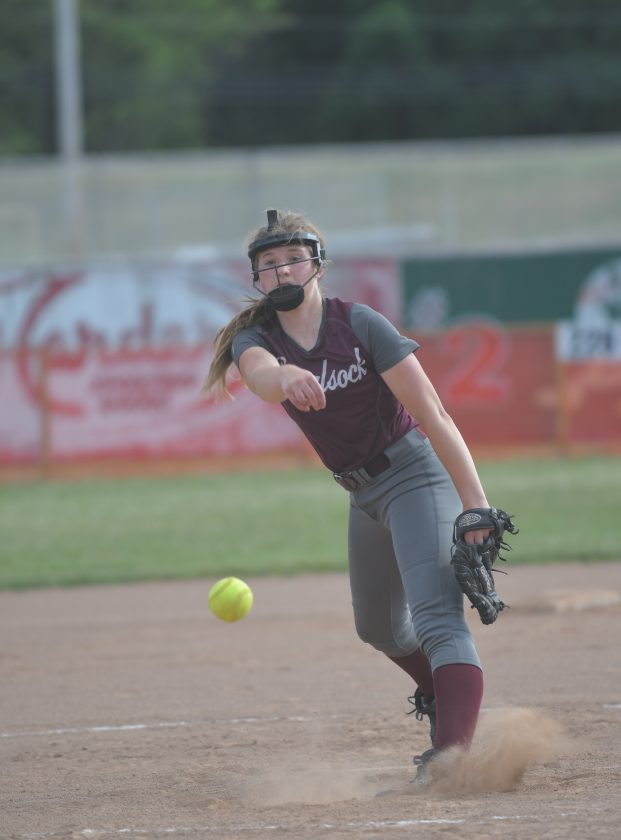 Marissa Helmrich did not play an official high school softball game last spring. She did pitch in a scrimmage, but that was played on a high school football field and it was not a pleasant experience.

Weather forced Loyalsock to play that scrimmage last March on the turf football field instead of at Short Park. Portable mounds were used, but Helrmich never felt comfortable.

Put her back on an actual softball field, though, and Helmrich looks perfectly at ease. Opposing hitters could be the ones feeling mighty uncomfortable the next three years.

A sophomore-to-be, Helmrich dazzled Wednesday pitching against South Williamsport in the Elm Park Town League. Helmrich threw four innings of one-hit softball, struck out seven and did not allow a run as Loyalsock won, 6-3. Helmrich opened the game by striking out three excellent South graduates in order and never let up, helping Loyalsock improve to 2-0.

“I’m glad I get to face good competition like this. It really helps,” Helmrich said. “I face a lot of good teams in travel, but I was really happy to face a team with upperclassmen.”

“When she pitched against Hughesville last week I was worried that she was throwing fast but was throwing it right down main street. She moved it around better today,” Loyalsock assistant coach Chris Molino said. “She’s come a long way.”

Helmrich has the work ethic to match her talent and has been working with former Loyalsock all-state pitcher Kayla Gee as well as her coaches. She also has excelled while playing travel softball and threw a no-hitter last week at Lewisburg while playing for her 16U team.

South coach Tom O’Malley knew all about Helmrich before his team faced her Wednesday. O’Malley coached Helmrich during her seventh grade year at Loyalsock when he was the junior high coach there. She was good then and has kept getting better with the best possibly still coming.

“She pitches real well. She’s always played travel ball older so she’s always gotten that experience,” O’Malley said. “She’s polished for as young as she is. She has a chance to be one of the best pitchers in the area. She’s tough.”

Helmrich throws in the upper 50s and complemented her speed with some change-ups and a drop curve ball against South. Twice she struck out three straight batters and Helmrich displayed her mettle in the fourth inning after an error opened the door for a two-out rally. Lilly Eiswerth broke up Helmrich’s no-hitter with a two-out single and Mookie Sauers walk loaded the bases.

It was a good challenge for Helmrich against a good hitter in graduate Sami Branton. Helmrich fell behind in the count, 2-0, but fought back, threw two consecutive strikes and induced an inning-ending flyout to right field.

“She’s got better command. When she pitched with me she’d strike out a lot but she’d also walk a lot,” O’Malley said. “Now her command is a lot better. She was throwing before, now she’s pitching.”

She’s hitting, too. Helmrich slammed a two-run double to deep center field in the second inning, putting Loyalsock up, 4-0. She also drew a walk and has helped Loyalsock score 26 runs in its first two league games.

Like so many other players, Helmrich was frustrated and hurt when her high school season ended before it started. All she can do now is make up for lost time and embrace new opportunities. She certainly has done that so far this summer.

“It feels great to play again,” Helmrich said. “When I found out there was going to be this league I was extremely excited. I appreciate this league and softball.”

South has its own potential breakout sophomore pitcher for 2021. Aleigha Rieppel was outstanding in relief against Loyalsock, throwing three hitless innings while giving her team a shot at coming back. It was an impressive outing against a strong and deep offense. Rieppel could have seen varsity innings last year as well and kept Loyalsock off-balance with a nice mix of pitches.

Maybe more important was how Rieppel responded under pressure. After throwing a hitless inning to open, Rieppel encountered trouble when Loyalsock loaded the bases with one out in the sixth. Unfazed, the right-hander maintained her composure and induced consecutive infield pop-outs. She also stranded a runner on third in the seventh inning and has reached base in four of her five at-bats through two games.

“I was impressed with Aleigha. I like her rhythm. She gets the ball and throws it,” O’Malley said. “She’s a good athlete. She competes and she’s tough. She’s mentally and physically strong. She’s got a lot of upside.”

South’s Hailey Debrody is off to a torrid start in Elm Park Town League play. The senior-to-be went 2 for 2 with a home run, double and walk against Loyalsock. In her two games, Debrody is 4 for 5 with three runs and two RBIs. She also retired the last nine batters she faced in relief against Loyalsock … The bottom of the order came up big for Loyalsock, producing six RBIs and three hits in the second inning. Kam Pryor capped the rally with a two-run single and also stole a base.