Montoursville native Hoffman finding confidence with move to 197 for OSU 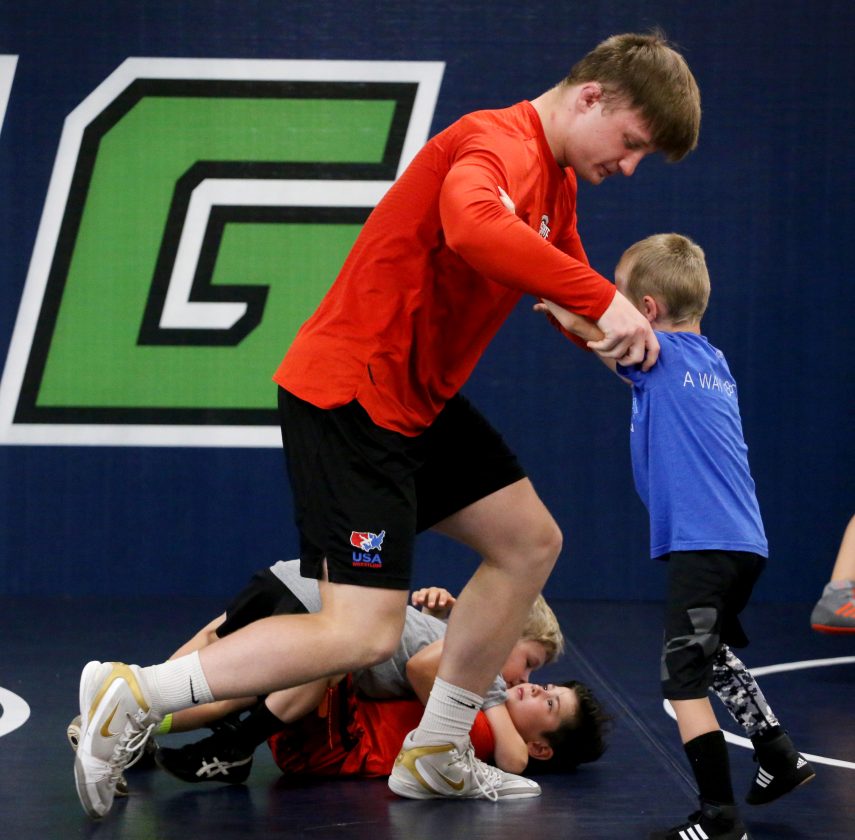 It wasn’t the losing which got to Gavin Hoffman in his first varsity season of wrestling at Ohio State. He’s lost matches before and he knows how to handle it.

But the idea of not wrestling to his potential is what sent the Montoursville graduate to what he called “a dark place.” He was struggling to maintain his weight at 184 pounds for the Buckeyes and still have the energy to compete at the level which made him the No. 1 recruit in the country at 195 pounds coming out of Montoursville High School.

It wasn’t that Hoffman’s weight was out of control. But it took a lot of work to make sure he was in a position to make weight come competition day. So instead of going into practice to get better each day, he was going in to maintain his weight.

It led to a season in which he dealt with adversity like he’s never dealt with before. He was just 10-7 wrestling at 184 pounds, including a trio of losses to nationally-ranked wrestlers.

“It took me to a dark place,” Hoffman said. “I felt like I was in a slump I couldn’t get out of. I needed to change some things in my life. I needed to focus on going into practice and getting better. And the main thing was letting myself grow.”

When Hoffman arrived in Columbus as a freshman in 2018, getting on a college weight-lifting and diet plan allowed him to get more lean and make 184 pounds more easily during his true freshman season. And as he competed in open tournaments that first season, there was enough time between weigh-ins and when he wrestled he could regain his strength and stamina.

As a true freshman he went 22-3 during his redshirt season, losing twice at the Midlands to take fifth at one of the country’s premier tournaments. He won 184-pound titles at the Ohio Intercollegiate Open, the Michigan State Open and the Edinboro Open. He took second at the Lindenwood Open, losing only to two-time All-American Emery Parker of Illinois, 5-4, in the final.

It felt like Hoffman had a home at 184. And with incumbent starter Kollin Moore in the midst of his second of three All-American seasons at 197 pounds, staying at 184 provided an avenue to Hoffman for a starting spot in the Buckeyes’ lineup come the 2019-2020 season.

But Hoffman could feel his body beginning to grow. Maintaining his weight became a chore and getting better became secondary. And with just one hour between weigh-ins and competition, his results suffered. Hoffman lost during the team’s wrestleoffs to Zach Steiner, 5-4, as he ran out of gas late in the match.

He was walking around his true freshman season in the mid to high 190s. He was even bigger last season making the cut even harder.

“I had no energy, no strength,” Hoffman said. “I had never experienced feeling like that before.”

Hoffman went 1-2 at the Michigan State Open. He won the Ohio Intercollegiate Open without wrestling a Division I opponent. He lost to 11th-ranked Nino Bonaccorsi of Pitt, 10-5, in a dual. He lost to fourth-ranked Ben Darmstadt of Cornell in a dual before going just 2-2 at the Cliff Keen Las Vegas Invitational. And when coach Tom Ryan sent him out in a dual against Arizona State, Hoffman lost by major decision to two-time NCAA champion Zahid Valencia, 19-5.

That dual against the Sun Devils on Jan. 6 was the final time last season Hoffman wrestled at 184 pounds. He competed in five open tournaments after that dual, wrestling each one at heavyweight. It allowed Hoffman the opportunity to let his body grow and not focus on cutting weight when he went to practice.

“Being able to get back to my natural weight and get back in the practice room and work, I felt like I was getting back to my old self again,” Hoffman said. “I started to wrestle at the level I knew I could wrestle at. It was a lot of ups and downs, but I wouldn’t change a thing about it.”

Hoffman will move to 197 pounds this season when he returns to Columbus in August. He’s hoping to fill a starting spot for Moore, who graduated after an undefeated senior season. Currently, Hoffman is walking around at about 210 pounds, making the cut to 197 much more tolerable.

But more importantly, he’s starting to gain back the confidence he had when he was the top 195-pound recruit in the country just two years ago. He’s spent his time away from school working on his technique and lifting weights and he’s caught the eye of an Ohio State teammate already.

“He’s someone I look up to and someone I surround myself with because he’s a hard worker,” Ohio State’s Sammy Sasso said. “There’s people who work hard and there’s hard workers. He’s a hard worker because it doesn’t matter the situation, he’s going to keep pushing through. He’s a listener and he’s a student of the sport. You’re going to see a different version of him. I think he really locked down in this quarantine, too, and he really jumped level.”

“I already feel my confidence coming back. During the year, my confidence was at an all-time low,” Hoffman said. “This quarantine has really helped me. I was with my brother (Garrett) and I’m with Sammy and I feel myself getting so much better during this quarantine because I’m getting a lot stronger and a lot better technically.”

Hoffman knows outside expectations for him aren’t going to be very high after a rough season. But his own expectations are as high as they’ve ever been. He’ll be going back to school knowing he’s put in the work he needed to and knowing he’s at the top of his game.

He’ll be better prepared for the day-in, day-out grind of an elite wrestling room, and he can’t wait to use those daily ups and downs to make himself a better wrestler.

“I feel like no pressure is on me at all,” Hoffman said. “All I have to do is wrestle and show people how good I am. I think I’ll shock a lot of people by showing how much in these last six months I’ve grown and how much of a better wrestler I am. I’m excited to step on the mat again.”