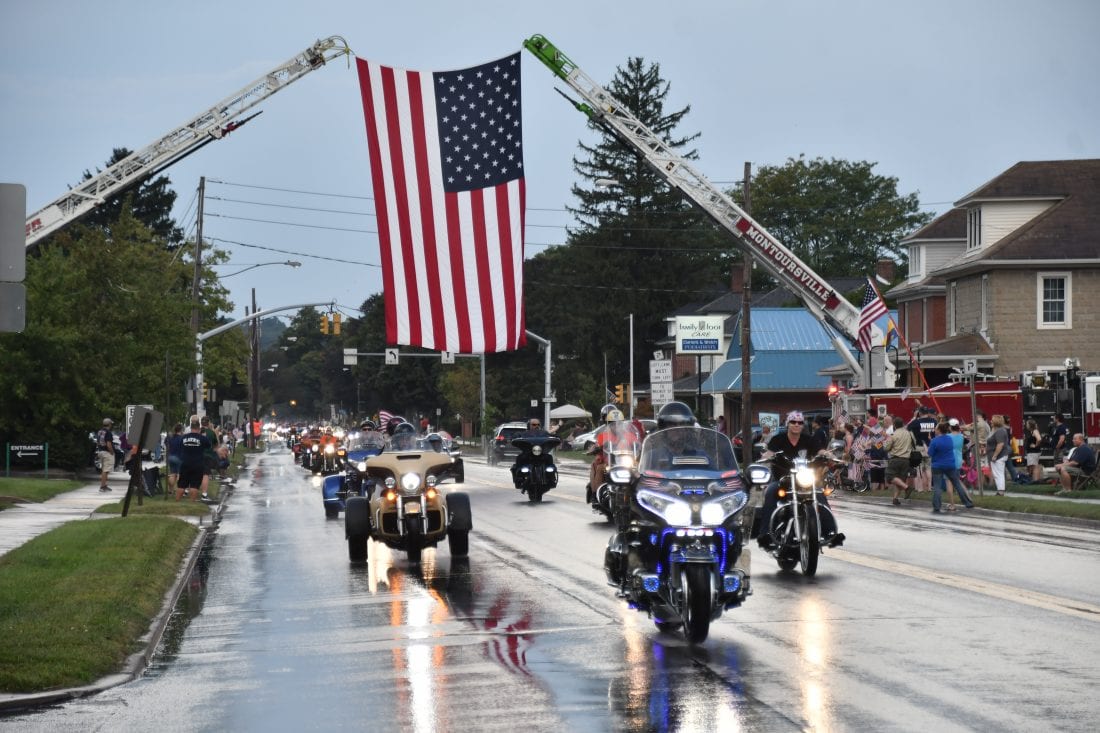 MARK NANCE/Sun-Gazette Bikers drive under a flag suspended by Muncy Ladder 39 on the left and Montoursville Ladder 20 in the righ on Broad Street in Montoursville during the annual 9-11 ride in Montgomery Wednesday.

The roar of thousands of motorcycles was loud, but patriotism and gratitude especially spoke volumes Wednesday evening during the annual 9/11 Memorial Ride.

There, a memorial held in honor of the late Father John Manno, who participated each year, kicked off the ride.

With only minutes until take off, there were more than 1,000 — and counting — registered to participate, according to Richard Boyles, member of the Red Knights Motorcycle Club.

Many of the riders this year were there to experience it for the first time, including veteran Lou Lusk.

“I got to connect with a couple of people I have served with here,” he said. “It’s awesome.”

Others have joined in for almost a decade, with emotions overflowing each year, and excitement to see everyone get together.

Milegros Mingle, of Montgomery, has ridden for almost nine years.

“I’m excited to see the people,” she said.

As time dwindled down, the memorial ride started with a moment of silence to pay reverence to those killed in the attacks on Sept. 11, 2001, and to introduce the Korean War Veterans Honor Guard who performed the 21 Gun Salute.

Tom “Tank” Baird, president of the 9/11 Ride Coalition, went over safety instructions to keep gaps in the ride at a minimum and to be respectful.

“We have had good luck with safety,” he said. “This is not a place for trick riding or disrespect, this is a rolling memorial. Treat it like that.”

With that, the memorial started, bringing locals to tears with the memorial for Father Manno and lives lost in the attacks.

The ride, which went up Route 15, across the Arch Street bridge, along Third Street through to Montoursville and then along into Pennsdale, Hughesville and Muncy before circling back into Montgomery, lasted hours and continued despite a heavy, albeit brief, evening rainstorm.