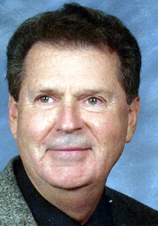 Matthew Myers Rook, 79, of Loyalsock, died peacefully May 13 in The Gatehouse at Divine Providence Hospital surrounded by his loving family.

Matt was born August, 7, 1937, at home in Williamsport. He was the devoted son of Thelma (Welch) Rook.

Matt graduated from Williamsport High School in 1956. He was a multi-talented athlete, excelling in football, basketball and baseball. Matt attended Lycoming College on a football scholarship then transferred to finish his education at Ventura College, Ventura, Calif., on a baseball scholarship. While in California he was sought out by the San Francisco Giants. In 1989, he was inducted into the West Branch Sports Hall of Fame for football, basketball and softball.

During his children’s youth he coached Sunday School basketball and managed the Electricians at Brandon Little League.

Matt was also a Fourth Degree Knight of Father Reichsteiners Council 366 assembly (The Knights of Columbus.)

Matt was preceded in death by his mother, Thelma Rook; and two sisters, Jean Fagles and Betty Bartholomew.

Most of all, Dad loved his family and friends. He was very proud of his Irish heritage, which only goes on to speak for his love of Notre Dame. He cherished the fun times; always having a sense of humor which he applied each day of his life.

A Mass of Christian Burial will be celebrated at Saint Joseph the Worker Parish, 702 W. Fourth St., on Friday, May 19, 2017, at 10 a.m. With his pastor Rev. Brian Van Fossen officiating. The family will receive family and friends in the Church portico from 9-9:45 a.m. Burial will be held at a later date at the convenience of the family.