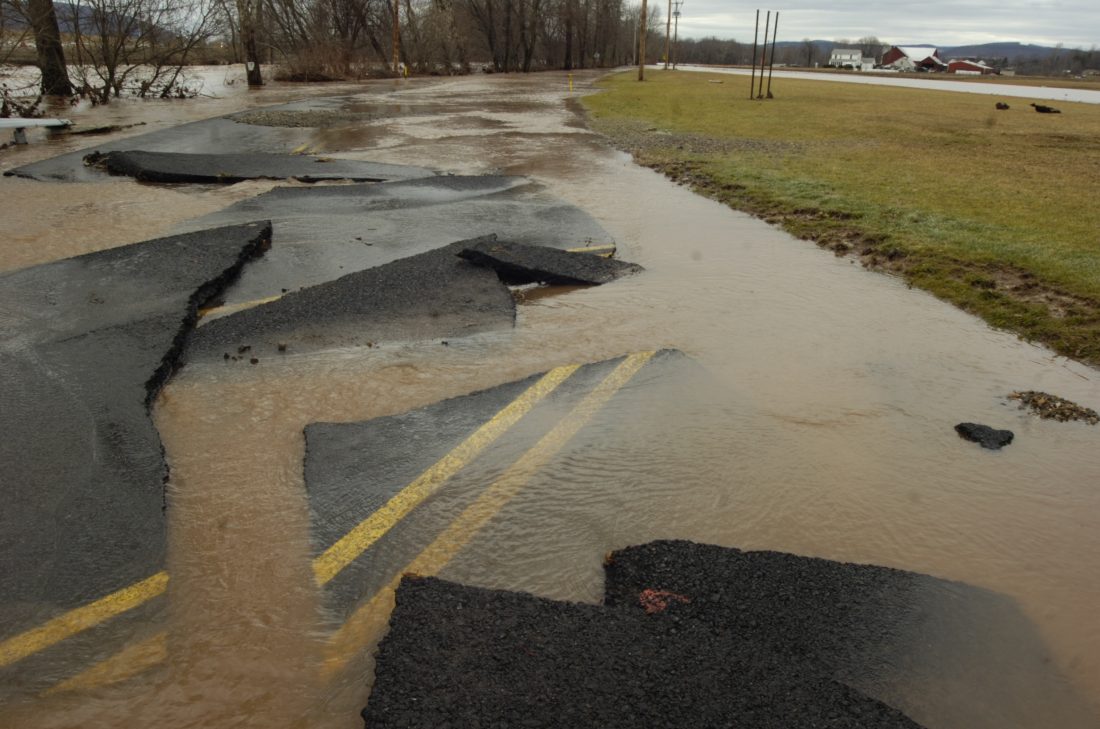 Sun-Gazette File Photo Water flows over Chippewa Road near Hughesville following heavy rain in 2004. The road was washed out after being repaved.

MUNCY — The Federal Emergency Management Agency is clamping down on Muncy Borough for what the agency believes are overlooked flood regulations. The council put forth ways to address it at its meeting Tuesday night.

Buildings in the federally mandated flood plain must have permits for any residential construction, including minor projects such as replacing a door or working on roof repair.

If FEMA determines that the borough has not been appropriately monitoring construction, then FEMA gives a time period for the borough to pay for renovations to get a building up to code through an auditing system.

Another time period is given, and if work still has not been done, FEMA withdraws its National Flood Insurance Program support.

“Which means every mortgage, on the day they do that goes in default,” said Edward Feigles, council chair.

With 40 percent of the borough residing in the floodplain, the consequences could be extreme. One council

person noted it could be as much as $100,000 to raise a building to meet the federal standards.

“We have no choice — to enforce or be destroyed,” said Feigles.

According to the council reports, a house on Division Street was sold, renovated and purchased without a permit, catching FEMA’s attention.

Additionally, if a house undergoes renovations that exceed half of the building’s total value, the owners must bring the home to meet federal floodplain standards.

Linda Stein recommended to have the codes department handle the matter, because — both under the previous and current zoning ordinances — the department serves as the floodplain administrators.

“So they have the training and they have the procedures to play this role,” she said. “This should continue to be his role, with our specific guidance.”

The Council will be meeting with the codes department at their next meeting at 7 p.m. on April 18. Other options are to have the borough manager or police patrol the area.

In other business, the Council did not take any action in adopting an ordinance to make enforcement of lit fireworks more stringent.

Last year had been particularly bad with people setting off fireworks within the borough; however, the council decided that state regulations — that fireworks cannot be lit within 150 feet of a building, — essentially cover the entire borough. This paired with the difficulty the police department already has in tracking down violators, the council did not make any motion.