Loyalsock class of 2019 walks into the future 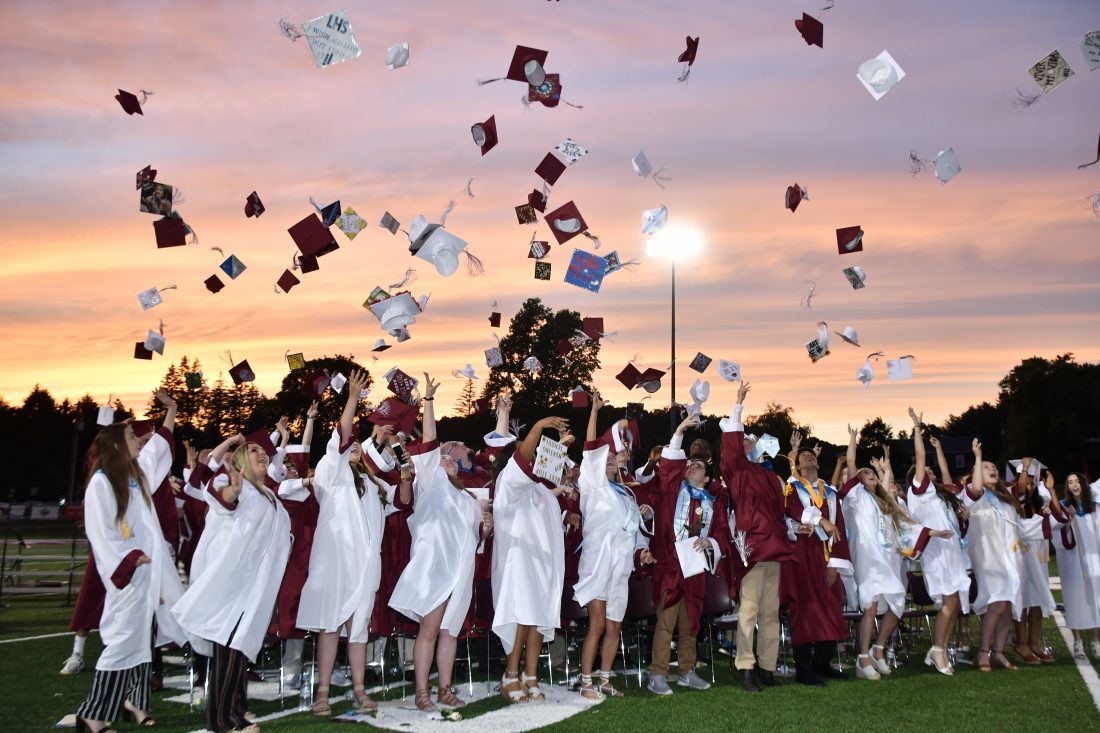 MARK NANCE/Sun-Gazette Members of Loyalsock Township High School's Class of 2019 toss their morter boards into the air at the end of their graduation Friday.

A brilliant orange and pink sunset blazoned across the sky as members of Loyalsock Township High School’s class of 2019 threw their hats in the air signaling not only the end of their commencement services, but also the conclusion of their academic career at the school.

“These Loyalsock students have truly set the bar high for all future classes,” he continued. “They have worked hard inside and outside of the classroom.”

Speaking about their career at Loyalsock, the student speakers focused on the theme “Long Story Short.”

Gabriella Gardner talked of the class’ time spent from elementary school up to the present as graduating seniors. Sharing humorous anecdotes about her fellow classmates, she said, “I cannot believe how far we have all come since we first set foot in Schick Elementary 13 years ago.”

“Everyone of us has a unique story to tell and somehow or other we each fit into at least one chapter of each another’s books,” she said.

After detailing the time spent through the years, Gardner concluded with, “The past may already have happened, but that doesn’t mean it’s gone and forgotten. The memories we made and the lessons we learned here at Loyalsock are what truly define the present versions of ourselves.”

She noted that some graduates may never want to leave this town, while others are already headed to somewhere else.

“Long story short, our narratives diverged today. Our books will tell different stories beginning with this present chapter, but we will always be able to look back at the pages and memories and ultimately realize that this place, Loyalsock, was where the Class of 2019 first learned to pick up the pen and write the words, ‘chapter one’,” she said.

Class salutatorian Quinn Deitrick focused on the “Long and Short of It” speaking about the graduates’ high school career.

“To make a long story short, our story has felt plenty long enough and it also feels as if it’s been too short,” he said.

Noting that even though the graduation ceremony would soon end, he said, “When this chapter of high school ends, a new one begins, but this next one, our future, is big and scary, but it is one I believe we are all ready for.”

Isabell Sagar, valedictorian, spoke of the stories yet to be written by the new graduates in the future.

“My classmates are brilliant; they are the bravest, smartest, most talented people I know. My classmates will write stories as fascinating as Tolkien’s most splendid novels, they will pen poetry as beautiful as Shakespeare’s most dazzling verses, they will author adventures as marvelous as the greatest of Twain’s works,” Sagar said.

Keynote speaker for the evening was local attorney William Carlucci, a 1973 graduate of Loyalsock High School. He offered the grads a to-do list to accomplish within the two days following graduation.

He told them to hug each other, thank their teachers who have made a difference in their lives and to write the first draft of their obituary in order to plan the next phase of their lives.

Midway through Carlucci’s speech, a helicopter landed on the football field behind the speaker’s podium to deliver the diplomas for the graduates.

Flawlessly recovering from the interruption, Carlucci concluded, “The point of writing this first draft of your obituary is not to list what you have already done. It is to get you thinking about what to being doing right now, so that 99 years from now, your loved ones can write a really fascinating long story short.”