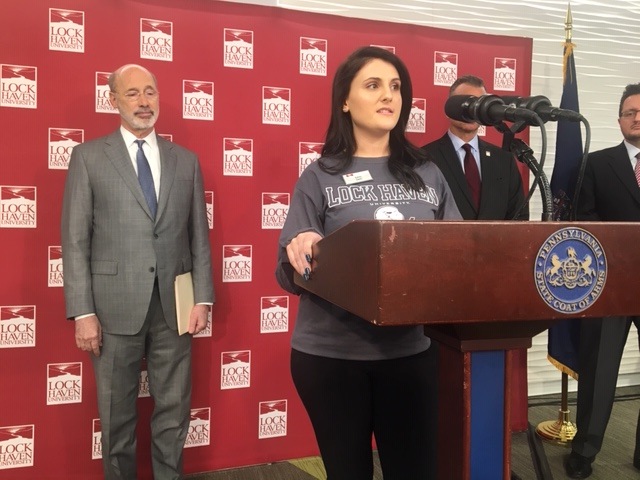 The tour is designed to discuss his proposal to help thousands of low- and middle-class students afford their dream of getting a college education.

The governor is proposing the Nellie Bly Scholarship Program, a $204 million need-based scholarship that will help close the gap after a student’s Pell Grant and other state grants to enroll in a Pennsylvania State System of Higher Education (PASSHE) university.

Wolf was welcomed by Lock Haven University President Robert Pignatello, who was joined at the podium by Randy Goin Jr., deputy chancellor for PASSHE and LHU student Kalista Swartz.

Wolf talked at length about the scholarship program and its significance for students, families and universities.

“This is something that I think any family in Pennsylvania, anybody who is thinking about going to post-secondary education, should be really pleased with,” Wolf said. “This is our future, folks. We need to do everything we can to make sure they have everything they deserve.”

The Nellie Bly Scholarship is a last-dollar-in program. To be eligible, students must enroll full-time in a PASSHE undergraduate program and qualify for a federal subsidized student loan. Students must commit to live in Pennsylvania after graduation for the same number of years they received the scholarship. If a student leaves the state early, they must repay the money. The program will be funded by repurposing revenues from the Horse Racing Development Fund annually.

Nellie Bly was a noted pioneering journalist who helped to force reforms to the mental health care system in the early 20th century. She was a native of Armstrong County and attended Indiana Normal School — what’s now considered Indiana University of Pennsylvania — but left because of the cost.

Wolf said that it’s imperative that those getting a secondary education don’t begin life after college with a mountain of debt.

“The one thing they shouldn’t start that future with, is debt. And yet, too often, that’s what happens. That’s what they start their life out of college — or out of school — with,” Wolf said.

That debt then impacts other aspects of life. Continuing an education, buying a home or starting a family then becomes an impossible dream, Wolf said.

Pennsylvania is ranked near the top as far as student debt is concerned. The numbers are staggering — student loan debt in the Commonwealth sits at $68 billion, among the highest in the nation. That’s an average of $37,000 per student. Wolf said that would equate to paying $391 per month for more than a decade.

“I think we are No. 2 when it comes to student debt in the United States. That’s true for students attending college all over the place, but it’s also true for students in our state university system, including Lock Haven. In 2019, the average debt for a student at a PASSHE school, like Lock Haven, was $34,039. I just bought a new Jeep. The Jeep I bought was less than that,” Wolf said matter-of-factly.

In addition to the $204 million for the scholarship, the governor’s proposed budget invests in higher education with $12.9 million to support PASSHE’s system redesign and a $60 million increase for the state Grant Program, which serves more than 130,000 students and will increase the maximum award to $4,700.

Wolf is hopeful that the Nellie Bly Scholarship Program will entice students to not only attend a state institution, but stay in the Commonwealth upon graduation.

“We have lots of students who come to Pennsylvania — really bright people — but too often they leave. After school, they go somewhere else. They take what they learned here and they enrich the economies, the communities and societies of California, Washington D.C., Massachusetts, New York or New Jersey. We want them to enrich the Commonwealth of Pennsylvania,” Wolf said.

Wolf introduced Swartz, an LHU senior from Juniata County and the first member of her family to attend college. Swartz gave an emotional speech, saying she was in favor of the scholarship as she hopes to continue her education at LHU and eventually earn her master’s degree.

She said that without aid, she wouldn’t be receiving her degree later this spring.

“Without having support of Lock Haven through institutional aid and affordable tuition and the Pell Grant, I would not have excelled as much as I have,” Swartz said. “Throughout my four years of schooling, I have received a Pell Grant, which has helped a significant amount not only in paying for my schooling, but decreasing the amount of additional loans I would then be taking. While I’m grateful for these opportunities, I still had to resort to additional student loans.”

In the future, the scholarship program could help bridge that gap for a student like Swartz.

“We have to define the eligibility requirements; who we’re directing this to,” Wolf said. “It’s a start and we’re working together to figure out exactly how it works. The first part is coming up with the money and we have a proposal for that.” 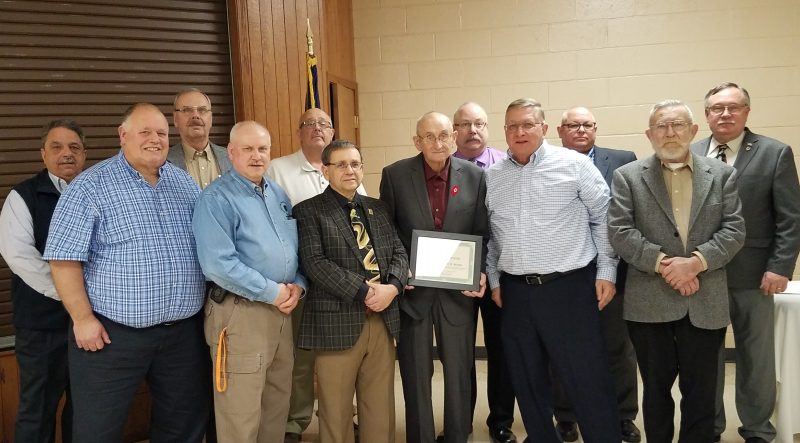 The Jersey Shore Area School District has issued a statement in response to a video which circulated on social ...

COLUMBIA, S.C. — For I.S. Leevy Johnson, the Democrats’ search for a challenger to take on President Donald ...