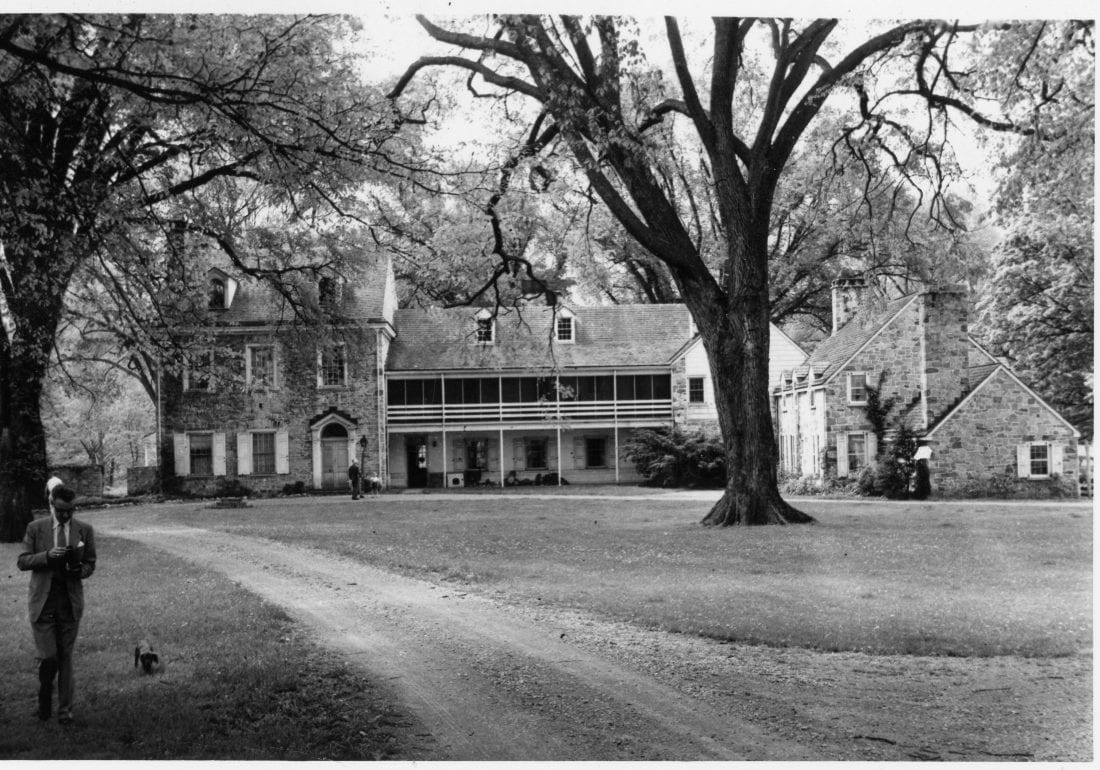 PENNSDALE — Malcolm Barlow says Muncy Farms was a wonderful place to grow up. As the oldest standing homestead in Lycoming County, the property has been the home of many generations over its 250-year history.

Currently owned by Malcolm Barlow and sister Sheila O’Brien-Barlow, Muncy Farms stands today across from the Lycoming Mall and encompasses 800 acres and borders the West Branch of the Susquehanna River to the south. At one time the property was as large as 7,600 acres, spanning the entire valley from Muncy to Montoursville, according to Barlow.

The homestead, made from mountainstone and limestone, was originally built by Samuel Wallis,who was a Quaker from Maryland and an entrepreneur, in 1769. He was one of the largest landowners and land speculators in colonial Pennsylvania, according to the Muncy Historical Society.

Wallis started out with 200 acres, “a land grab from the William Penn Trust” said Barlow. The home was a two-story, which Barlow says was unusual to have a second floor in 1769. The stones for the home were brought over from the mountain, across the river on sleds, Barlow said.

The home survived the Great Runaway in 1778 — every home in Lycoming County was burned down except the Muncy Farms homestead.

It was later revealed that Samuel Wallis was a British spy during the American Revolution and some speculate that may play a role in why Wallis’ home was spared.

When a construction crew dug on the property to install a swimming pool in 1926 the crew was surprised to unearth three British soldiers and two Native American bodies, according to Barlow. The soldiers were identified as belonging to the British military by the buttons on their clothes.

A historical plaque along the driveway marks the field where Fort Muncy, a colonial fort, once stood, having been twice destroyed and rebuilt a third time in 1778, according to the Muncy Historical Society.

The presence of the fort also signified what an important person Wallis was to have a fort on his property, said Barlow. Ft. Muncy was the only frontier fort north of Ft. Augusta, “this was the only place to hide”, and up to 600 troops were at Ft. Muncy at one time, said Bill Poulton of the Muncy Historical Society.

Muncy Farms and Wallis are also partially to thank for the founding of the city of Williamsport. Williamsport’s founder Michael Ross was an indentured servant at Muncy Farms, he came over at the age of 14 from England and became a surveyor when he was freed and laid out Williamsport, according to Barlow.

After Wallis’ death in 1798 the property spent a few years in bankruptcy.

Robert Coleman purchased the property around 1806, he gave the property to his daughter Elizabeth as a wedding present for her marriage to Charles Hall and the couple built a large addition to the original structure, according to an article in the Muncy Luminary. It was then known as Halls Farm.

The property was passed down through the Hall family, eventually coming to Henry Brock, who would reside there with his wife Margaret. Margaret and Henry welcomed four young siblings into their home from war torn England in 1940. Before the arrival of the children, Henry Brock died. Margaret herself, welcomed the children to Muncy Farms. Those four children include the current owners Malcolm Barlow and Sheila O’Brien-Barlow and their now deceased siblings Susan and Brian Barlow. Margaret did her best to make the children feel at home, says Barlow.

“She lit the entire house up, the reason for that is we were living in London during the blitz, and everything was blacked out and she wanted us to make the change to the freedom of living, she was a very thoughtful person.” said Barlow.

The Barlow children found Muncy to be quite different from the urban London they hailed from — “We had dairy, pigs, chicken, sheep. We used to go to town in a horse and carriage to save gasoline.” said Barlow. “We all participated in the farm, we helped make hay, during the war we had a huge garden and we had our own dairy, milk, cream and butter. It was a nice way to grow up.”

The home has seen a few additions over the years, the east wing in 1808 and the west wing in 1926. The home was totally renovated and modernized in 1926 when oil heat, electric and phone lines were added. A south wing was also torn down at that time because it was Victorian and didn’t fit in with the style of the home, according to Barlow.

Barlow proudly notes that the homestead has not been sold since 1803, it has been passed down through generations. Parts of the farm’s acreage have been sold off through the years and now is 800 acres.

The farm today includes five houses, two commercial properties, some wooden acreage and 400 acres of farmland, which grow corns and soybeans. As for the future of the property, Barlow hopes it will continue to be his family’s homestead for generations to come and welcomes the opportunity to open his farm for the 250th celebration.

“It’s unique in the area, and the oldest homestead in Lycoming County and we would like to share it with our neighbors and friends,” said Barlow.