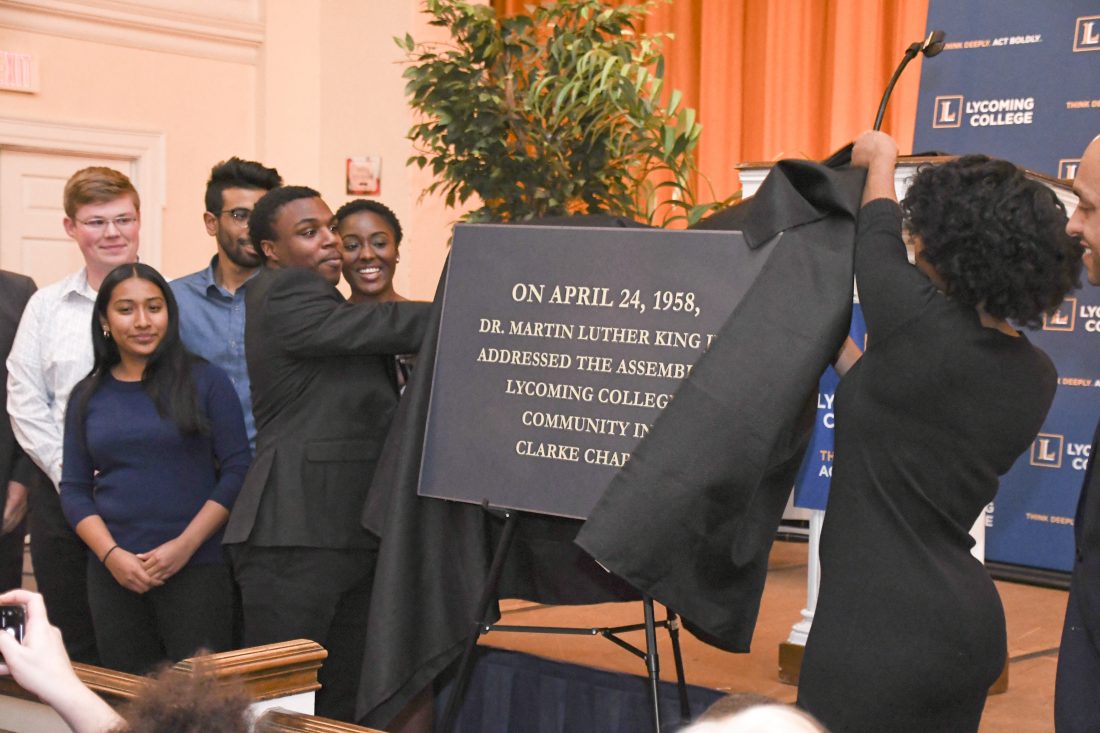 It was only fitting that Kay S. Huffman and Ruth Hodge were on hand Friday night for the unveiling and dedication of a plaque commemorating that visit by the civil rights leader to the college.

“Specifically, I remember that it was my 20th birthday and that I was part of Lycoming’s choir directed by Walter McIver that sang on stage when Dr. King spoke at the podium,” Kay S. Huffman, of Williamsport, shared.

“I had been looking forward to hearing Dr. King speak because of reading in the newspapers about this Baptist preacher in the South who so often was risking his life for what he believed,” Huffman said. “I admired his stance of non-violence to achieve his goals based on the teachings of Christianity.”

For Ruth Hodge, one of two African Americans in the choir at that time, hearing Dr. King speak was “awesome.”

“I did know about him and I became very excited when I heard he was coming here,” Hodge said, adding that she was even more excited when he asked to speak privately with the two African-American students.

“He first wanted to know what was our dream and what was our course of study and a little bit of our background. He pushed forth his subject that it was a good time to be alive,” she said.

With all that was going on in the country with segregation and racial inequality, Hodge said she questioned how it could be a good time to be alive, but that King told her and her classmate, “It’s going to be better. It’s going to be rough, but don’t let go of your dream.”

Huffman shared how after King spoke, she was “thrilled” when she had to opportunity to shake his hand and tell him how much she appreciated him and his message. She said that the 29-year-old King was very young looking and “had a presence about him, yet was so warm and approachable.”

Through the years, Hodge said she wanted to follow as much as possible King’s marches and walks as possible. Hodge, who was a librarian, also shared that she has every book that King had ever written.

During the dedication ceremony, Derek Slaughter, Mayor of Williamsport, who was also the keynote speaker, spoke of how King’s writings had inspired him at various stages of his life.

“I have spent many years reading and studying the life and times of Dr. Martin Luther King Jr. and this study had a profound effect on me, both professionally and personally,” Slaughter said.

He noted that during his high school years one of the most impactful quotes from King was “The time is always right to do what is right.”

Dr. Kent C. Trachte, president of the college, also spoke at the event, highlighting some of speech from that day in 1958. King had stopped here as part of a tour of colleges and universities across the country.

Trachte shared the historical context of King’s speech which came about 16 months after the Montgomery Bus Boycott, which had begun when Rosa Parks boarded an “all-white” bus in Montgomery, Alabama.

From his research, Trachte said that King’s speech would have emphasized that time, citing it as one of the most “momentous times in human history.”

“He said it is an exciting age, filled with hope. It is an age in which a new world order is being born and we stand today between two worlds, the dying old and the emerging new,” Trachte cited King as probably saying during his speech at the college, according to his research.

According to Jalen Williams, president of the student senate at Lycoming, the event was planned as part of Black History Month.

“I think that Lyco being a very small liberal arts school in itself, Dr. King choosing Lycoming on his speaking tour all those years ago is something we need to celebrate as long as we possibly can. We are now a part of history and, every time we think of Dr. Martin Luther King, we can think of ourselves being part of this grandiose idea of civil right and equality for everyone,” Williams said.