Macias returns to LLWS for ceremony 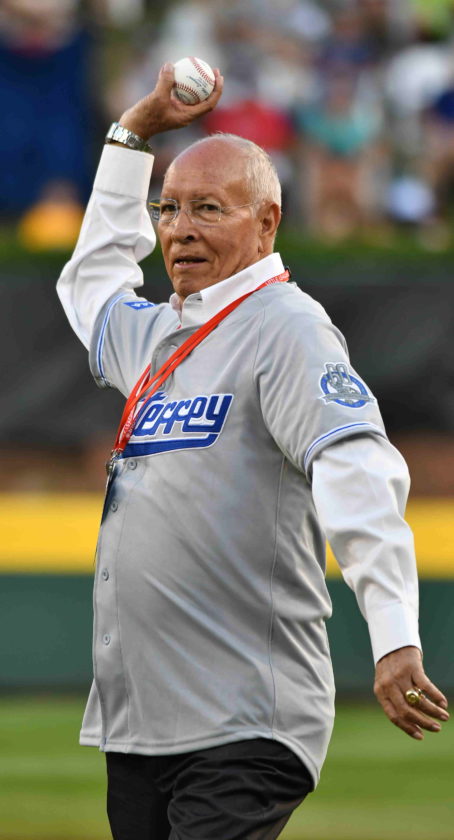 Angel Macias throws out the first pitch before Texas and North Carolina’s game at Lamade Stadium on Wednesday. (MARK NANCE/Sun-Gazette)

If there’s anyone who can appreciate consecutive no-hitters at the Little League World Series, it’s Angel Macias.

Macias, who Wednesday night became the newest enshrinee of Little League’s Hall of Excellence for throwing the only perfect championship game in LLWS history, nearly threw back-to-back no hitters in winning the 1957 title for Monterrey, Mexico.

He was inducted and joined by 2005 enshrinee Jose Maiz, a teammate from 1957. Maiz recalled how Macias’ no-hit bid against Owensboro, Kentucky in the Southern regional final in Louisville was marred by a single hit in a 3-0 victory.

Macias’ next pitching appearance was in the LLWS final, 4-0 over La Mesa, Calif. Macias struck out 11 in that game and did not allow a fly ball out of the infield.

Maiz said the one-hitter was very impressive on its own, but both laughed at the thought it could compare to the perfect game.

The induction ceremony took place before Greenville, N.C., met Lufkin, Texas at Lamade Stadium on the 60th anniversary of Aug. 23, 1957, the date of the perfect game. Sydney Leroux of the United States women’s national soccer team was inducted earlier this week, and special needs advocate Champ Pederson is to go in later this week.

Greenville made history by advancing with the first consecutive no-hitters in LLWS history, and it’s fine with Macias if Greenville or anyone else replicates his feat.

“I hope it happens soon,” said Macias through an interpreter. “I don’t have anything against it. If it happens this year, I’ll be happy.”

Macias was an ambidextrous player, though he said he only pitched right-handed and gave no thought to switching arms in an LLWS final. He played first base left-handed, but was an ambidextrous center fielder in the Angels organization in the 1960s before playing in the Mexican League.

But he soon grew annoyed at switching gloves, and sensed it in others, so he became right-handed only again. The fact that Pat Venditte made it to the majors in recent years as an ambidextrous pitcher impressed him.

“He had the skills to do it, and one of the few who decided to try,” said Macias. “A lot of people have the skills, but he did it and it’s impressive. It’s hard to do with maintaining both arms and two gloves.”

The victory itself was rare, as it became the first International team to win the LLWS, and Monterrey repeated in 1958. No Mexican team won an LLWS again until 1997, and none have won since.

The title run made for a good movie script, so “The Perfect Game” was released in 2009 based on the book of the same name from a year earlier. But Macias said he and his players in the Industrial League, the team that made it here for Monterrey, was largely for the families of parents who worked in factories in the town.

The people back home greeted the players as champions, Macias recalled, once they finally arrived after victory visits around the northeast and a meeting with President Eisenhower.

“That motivated us,” said Macias. “People came out from their houses and they were waiting for us.”

Little League considers enshrinement its highest honor. People must have played for a chartered Little League and be a recognized role model as an adult. Other notable enshrinees include George W. Bush, Joe Biden, Kevin Costner, Bruce Springsteen, and Sept. 11 firefighter Michael Cammarata, whose No. 11 is retired at the LLWS and on display on the right-field wall.

Macias was an active volunteer with Maiz in promoting the Monterrey Little League and was also the director of the Mexican Baseball Academy.

The top 10 percent and 1 percent