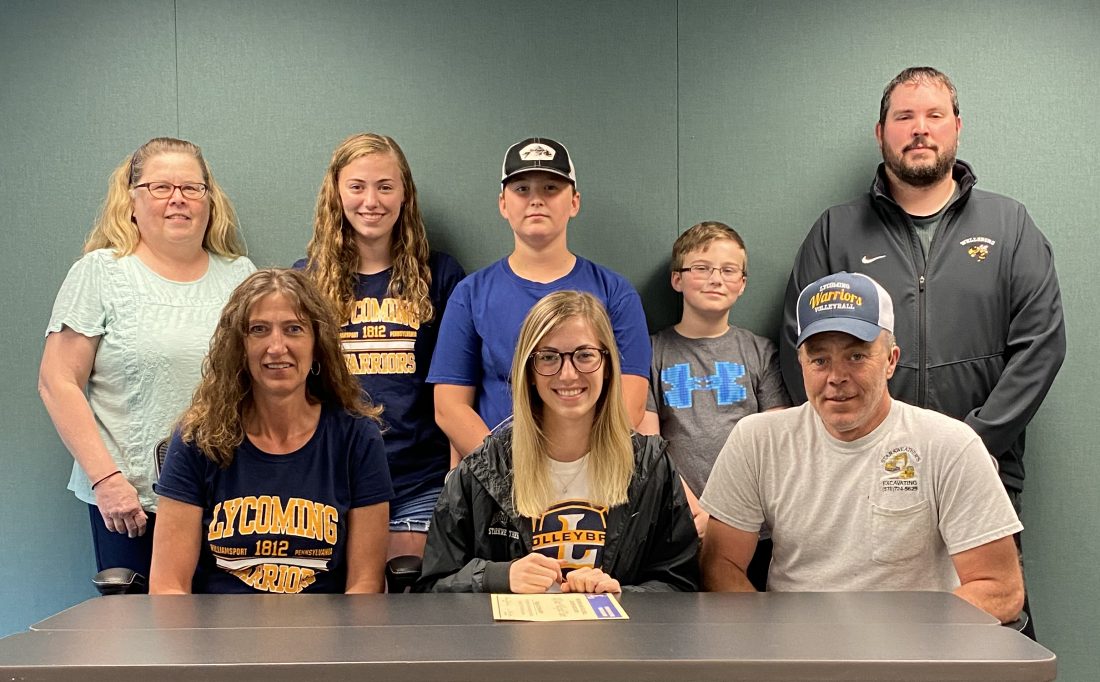 Megan Starkweather never backed down from a challenge or opportunity. If her coach needed her to play as a middle hitter, she had no problem playing there.

Move her to right-side hitter? She easily adapts.

After playing those two positions her first two years in high school, Wellsboro was in need of someone to become a setter for the girls volleyball team. That’s where Starkweather came in.

“I stepped up and took over that role for my final two years and fell in love with the position,” Starkweather said.

Starkweather is an extremely versatile player and helped Wellsboro excel the past four years. She will take that versatility and talent to Lycoming to play for the Warriors’ women’s volleyball team this upcoming season and look to keep the Warriors successful.

“I am so excited to be able to play at Lycoming under their great coaching staff and with the other girls on the team,” Starkweather said. “I think my best strength as a player is being versatile with positions and being OK with wherever my coaches need me. I am just happy to step on the court.”

Starkweather was one of just three players as part of Lycoming’s recruiting class for 2020 and she was the only United States player as part of the incoming group. The other players joining the 5-foot-10 Wellsboro graduate are Paulina Soto (Chihuahua, Mexico) and Gabriela Chaparro Coss (Rio Grande, Puerto Rico).

“It is good to know that they are confident with my abilities coming into the gym,” Starkweather said, adding she plans on majoring in psychology and getting certified to become a teacher.

The Warriors are coming off an 18-13 season in which the team reached the Middle Atlantic Conference tournament for the first time since 2016 and won the program’s first tournament match since 2014. Starkweather brings with her a qualified resume from high school to help keep Lycoming successful.

She helped the Green Hornets reach the district championship game her sophomore, junior and senior years against perennial power North Penn-Liberty, which Wellsboro lost to each season in the Class AA final. Last year, the Mounties reached the state championship.

Starkweather also was an all-state selection her senior year and had previously been named as a Northern Tier, District 4 and All-Region all-star. All four years as well, the Green Hornets had double-digit wins and reached the postseason.

Those games against North Penn-Liberty are among Starkweather’s best moments looking back over her career.

“North Penn-Liberty matches were always my favorite games of the seasons,” Starkweather said. “They pushed us to play our best and we had to earn every point ourselves. I play club volleyball with four of their starters, so it was always a fun match to play being on opposite sides of the net.”

Wellsboro each year is one of the best Northern Tier League teams and Starkweather is glad she was able to keep the program at the top.

“I am thankful for being able to play for such a strong volleyball program. Over the years, I have played alongside a lot of good players that pushed me to become a better player myself,” she said. “I have had really good coaches at Wellsboro that have helped me develop my skills over the years. In the gym, they coach you on more than just the skills of volleyball, but also a better mindset, which is important.”

Lycoming lost six players to graduation, including former Wellsboro standout Darci Warriner, who was a two-time all-conference selection. Warriner also was part of Wellsboro’s only two district championship teams since 2000, winning a title in 2012 and 2015 before North Penn-Liberty’s string of four consecutive championships.

For Starkweather, it’s a chance at Lycoming to continue that success from Wellsboro and follow in Warriner’s shoes at the collegiate level.

“Darci has always been someone that I look up to. When I was in middle school, I would go to camps and clinics that she would help at,” Starkweather said. “She was the one that contacted me about Lycoming and I am so glad she did.”