‘To Kill a Mockingbird’ comes to Millbrook Playhouse stage 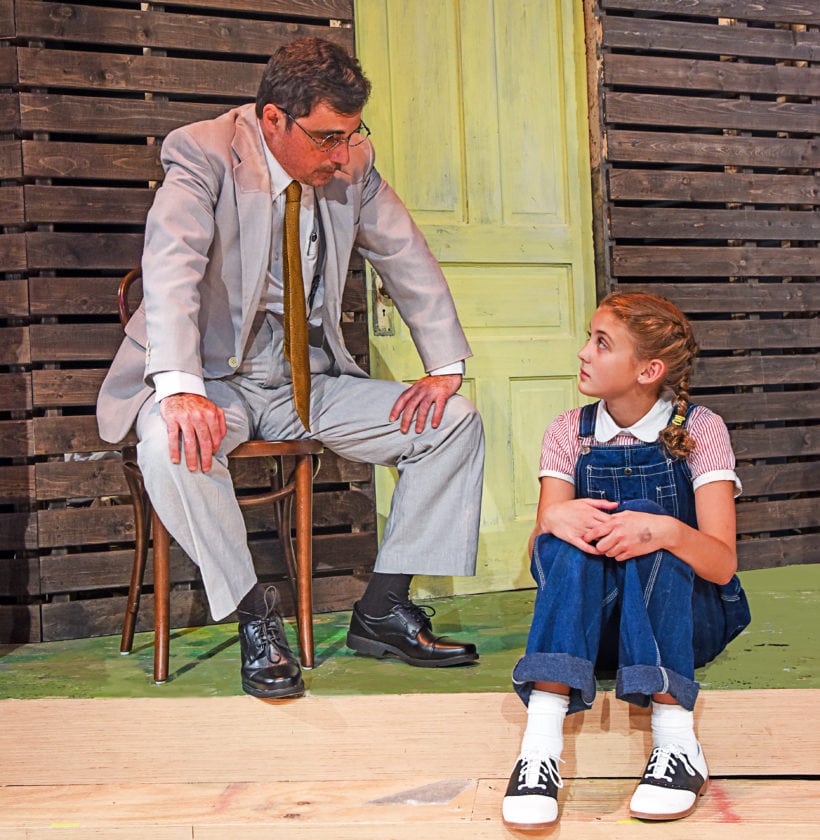 MILL HALL — “Shoot all the blue jays you want, but it is a sin to kill a mockingbird!”

The stage adaptation of the Pulitzer Prize-winning novel “To Kill A Mockingbird” is the current attraction at Miillbrook Playhouse, 258 Country Club Lane, with 7:30 p.m. performances tonight, tomorrow and Saturday, and a 2 p.m. matinee on Sunday.

This adaptation of Harper Lee’s watershed novel, as the only non-musical presented on Millbrook’s Main Stage this summer, receives a powerful and at times poignant production.

Many middle schools’ curriculums include required reading of “To Kill A Mockingbird,” but presenting the stage version of this classic story is far from common — until recently.

Although some contemporary musicals are simultaneously selected by more than one theater group for their season, clearly this is not the case not with a drama. But “To Kill A Mockingbird,” partially because of its relevance and timely themes of justice and intolerance, has been chosen by three area groups for production in their 2018-19 season.

In addition to Millbrook’s current production, “Mockingbird” will also be presented by the Bloomsburg Theatre Ensemble in April 2019, and followed shortly by the Community Theatre League’s version in May.

It is likely an arduous task for the Artistic Director to both select a non-musical with enough drawing-appeal for the Upstairs Main Stage, and to assign a director for the chosen play. But for this production, Millbrook’s artistic director David E. Leidholdt has placed himself in the Director’s chair.

Leidholt very efficiently directs “Mockingbird,” fully utilizing every available stage space, including having some characters enter and exist from the center aisle. Leidholdt in his welcome, alerts the audience that the story is presented as written by Harper Lee, with “mature themes and language.”

Set in Maycomb, Alabama in the 1930s, “To Kill a Mockingbird” focuses upon the Finch family, especially on Scout, the young daughter of Atticus Finch, a principled lawyer who represents an black man that has been falsely accused of beating and raping a white girl.

Heading the cast is Millbrook veteran Frank Franconeri as Atticus Finch. His willingness to defend the black man effectively impresses upon his children that the only thing that can not be decided by majority rule is an individual’s conscience. With the opening night audience completely silent, Franconeri’s impassioned summation at trial crackles with gripping intensity.

More than any other show this summer, the cast of “Mockingburd” consists of a good mix of professional actors and community thespians. It is notable that Millbrook Board members Martena Rogers and John Shaffer are featured in the talented ensemble.

And a trio of area youngsters play important roles. Maia Crowell is cast in the pivotal role as the feisty tomboyish Scout. Logan Dawes plays her older brother Jem, with Ayden Mitchelltree as the bookish Dill. This production is enlivened by their performances as each brings their character to life, performing well and staying in character throughout the play.

Nikki Yarnell us effective as Miss Maudie, one of the main protagonists, acting as the play’s narrator.

Only double-casting Andrew Confair as both the judge and the reclusive Boo Radley is a distraction.

The brief Act I, set in and about the Finch porch, has interplay between Atticus and his children and necessary exposition. The show really jells in Act II, as the setting moves into the courtroom where the ugly side of injustice rears its head with the biased jury’s verdict.

With very effective lighting, this production has a running time of approximately two and one half hours with one intermission, with little emphasis on displaying any southern accents.

“To Kill a Mockingbird” is a coming-of-age tale in an unjust world — but also far more. The unfair treatment and hunting down of mockingbirds is a metaphor of the injustice which Harper Lee penned in her novel.

And Millbrook’s “Mock­ingbird is a need-to-be-seen, vivid depiction of a time and place where intolerance and injustice as meted out in the fictional town of Maycomb may still be too commonplace in real life today.