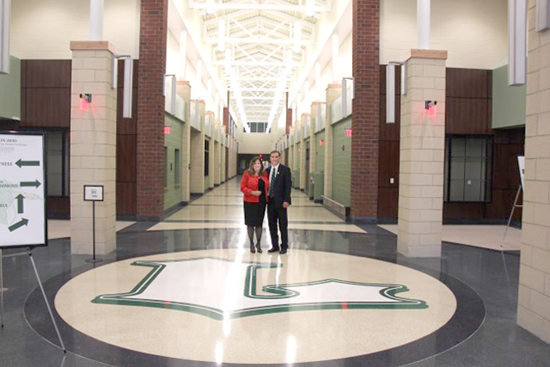 LEWISBURG — The 550 Lewisburg Area High School students have made themselves at home in a brand new high school at 545 Newman Road.

The $35 million project took two years to build on the district’s 200 acres of land in Kelly Township, according to Kathy K. Swope, district school board president.

The new building is opening horizons for the students that would not have been possible without the construction of the 183,000 square foot facility, Swope said. There is a large auditorium with an orchestra pit, a competition-sized gymnasium, an auxiliary gym, a school store and a TV studio.

Many of the amenities were able to be purchased through donations from the Green Dragon Education Fund.

Outside there is a turf soccer field that is in partnership with the North Union United Soccer Club, multiple practice fields, 500 solar panels and wetlands that the science department plans to explore, she said. 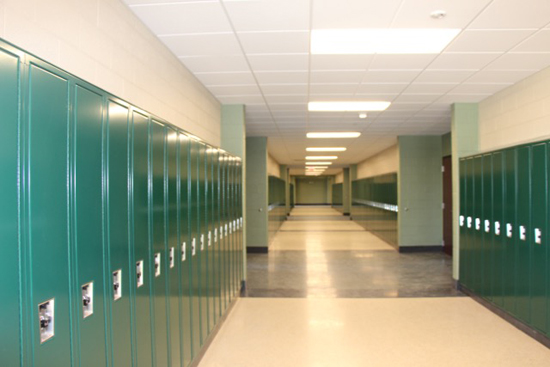 “Education is about the relationship between teachers and the students, it’s like when you build anything, if you have the right tools you can do the job better,” she said. “We are giving our teachers the tools to do more and giving the students an environment to thrive in. You don’t need any reason more than that to be excited about this new high school.”

The idea to construct a new building was a result of Vision 2020, the district and community’s outlook for education in Lewisburg, which began in 2007, Swope said. Over 200 community members gave their input about their hopes for the community’s children and what they need to succeed in the future.

It was called 2020 because the plan was to follow the graduating class of 2020 who began kindergarten in 2007, she said.

One of the themes within the vision was facilities which is where the conversation about the quality of the high school came into play.

The former building along Market Street was built in 1928. 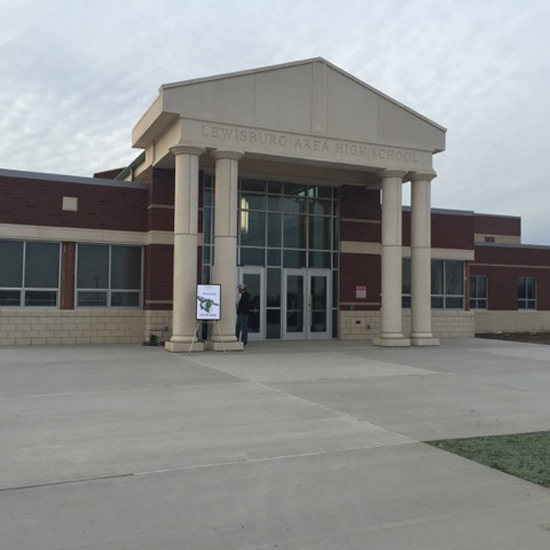 “The style of education in the 20s was you sat in rows and the teacher stood at the front with a chalkboard,” Swope said. “The classroom spaces were not designed for the type of collaborative learning we do today.”

Often the students are asked to break into smaller groups to discuss topics and create presentations for class.

The new building has flex spaces which are rooms in the school where students can break into teams to work on projects during class time or over lunch, she said.

In the old high school, the gym was solely intended for physical education classes so there were no bleachers for spectators so all high school sporting events were held at the middle school.

It was a problem because it would often conflict with middle school athletics, she said.

The school board and community volunteers discussed the possibility of renovating the building but the cost was so similar to what it was to build a new school, Swope said.

The building is 117,000 square feet at the intersection of Routes 15 and 45 so having construction vehicles around would affect the flow of traffic. If there were additions to the building, that would leave little outdoor space for students to go outside for gym class, she said.

“There would have been no way due to space,” she said.

Since the district has vacated the property, a company called Green Space repurposes old high schools, Swope said. The building will have community and small business tenants to utilize the space.

Swope said she is excited and happy for the students to have this new building.

“There are so many new horizons that are opening up for them, that excites me and makes it all worthwhile,” she said. “As far as I’m concerned there’s nothing more important for the health of a community is to educate its children well.”

The Donald B. and Dorothy L. Stabler Foundation, of Harrisburg, has awarded a $500,000 grant to both Lycoming ...

You are one in a Million(aire)

To provide information to students about mental health as well as resources available to them, both through the ...

A quality public education is a key that can open doors of opportunity for many students. Providing that education ...

Information Technology, ‘A place for girls’

TURBOTVILLE — Take a fantastic musical adventure with an out-of-this-world car that flies through the air and ...