Everett talks legislation at editorial board: Announces he won’t run again after finishing out 7th term 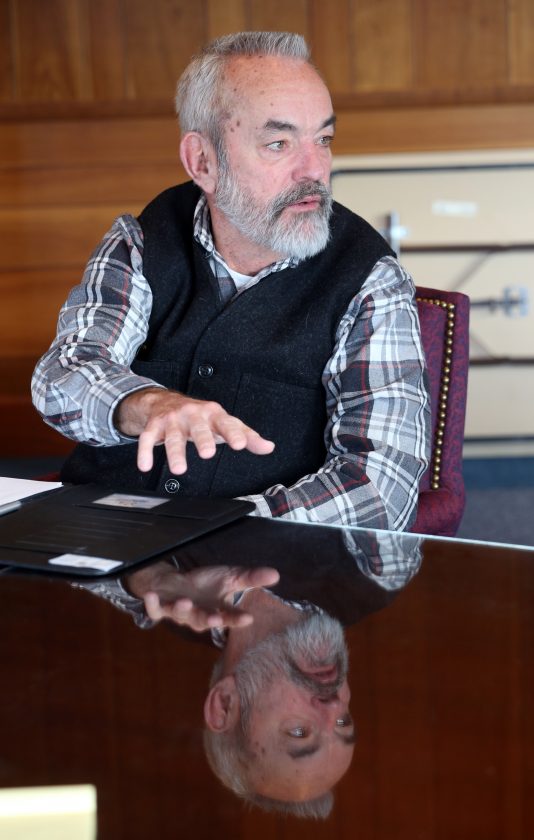 A Muncy area state lawmaker is calling it quits in November, after 14 years of service in the state House of Representatives.

State Rep. Garth D. Everett, R-Pennsdale, told the Sun-Gazette editorial board Monday he would finish out his term ending then.

Everett, who turns age 66 next month, is chairman of the state Government Committee.

Over the course of an hour, Everett touched on a broad spectrum of legislation. He also pointed to local laws important to him and the region’s constituency.

“Our district’s number one complaint is phone calls,” he said, of those repeated calls from telemarketers and robo-calling systems that bother individuals with cellular and landline telephones.

Legislation, in conjunction with the Federal Communications Commission, to create a permanent “do-not-call list” may be the solution, he said.

Everett said he supported raising the age for vaping and use of tobacco products to 21.

While he said he understood increasing the age for use of vaping and tobacco was overall better from a health perspective, he was troubled a man or woman can join the military and possibly serve in war at age 18.

Everett said state lawmakers reached a concensus on making it more difficult for public servants who commit certain crimes to collect their pensions.

He cited the example of Jerry Sandusky, the former Penn State defensive coach who was found guilty of molesting teenage boys and is serving a lengthy prison sentence, but who tried to get his pension unsuccessfully rejected by a judge.

The Legislature passed a bill to do away with cash assistance, which used to amount to $200 a month to those who did not qualify for any other assistance from the Department of Welfare and who remain able bodied and can work, Everett said. Gov. Tom Wolf vetoed that legislation, but it was overridden in the General Assembly, he said.

Redistricting reform continues, he said. While gerrymandering, or slicing the state into voting divisions to favor a particular political party based on assumptions on population and other factors, is wrong, the redistricting for elections should not be for the state judiciary to determine, he said. Instead, Everett said a better idea is for the legislature, with public and court scrutiny, to redraw districts.

“I don’t know if there is consensus in the legislature to make a change,” he said.

In terms of higher education assistance, Everett praised a new law to provide tuition assistance for members of the National Guard and their families who want to attend or get further education at one of the Pennsylvania State System of Higher Education colleges and universities.

To help victims of sexual abuse and other instances of assault, the legislature changed the statute of limitations to expand the number of years for alleged victims to file a criminal or civil claim.

Previously victims had six years to report sexual or other types of abuse, he said.

In other areas of criminal justice reform, Everett wants to see an end to mandatory minimum sentences for offenders of nonviolent drug crimes and occupational licensing reform.

“We want these people to find work, right?” he asked.

As vice chairman of the Chesapeake Bay Commission, Everett said the law recognizing the Eastern Hellbender as state amphibian was about the transformational changes of the Susquehanna River Basin and watershed.

“It symbolizes clean water,” he said, of the hellbender, an amphibian that occupies the state’s rivers and creeks, as proof fresh water is becoming cleaner for it to survive.

Everett also touched on the issue of election reform bill package, some of which Gov. Tom Wolf disagreed with and other areas where compromise was found.

The governor “decertified” every voting machine in the state, Everett said.

Everett said money for counties to cover 50 percent of the cost for the transition of the machines was needed.

Everett said he supported the elimination of straight-party voting on machines and agreed with settling on 15 days before an election as a deadline for prospective voters to register to vote in the election. The bill also bundled some legislation on mailing in ballots and absentee ballots, he said.

A law was passed to make it easier for landowners to post on private property no trespassing, especially applicable to hunting season, he said.

The rule is purple stripes painted on trees to denote the hunter must get permission to hunt on the land, he said.

There are round white circles on state Department of Conservation and Natural Resources’ properties, he said.

An advocate for the outdoors, Everett said additional days for rifle deer hunting season give opportunities for hunters to bag bucks that otherwise might be struck by vehicles.

“A lot of younger folks … like it,” Everett said. “The older, traditional folks like the old, traditional ways.”