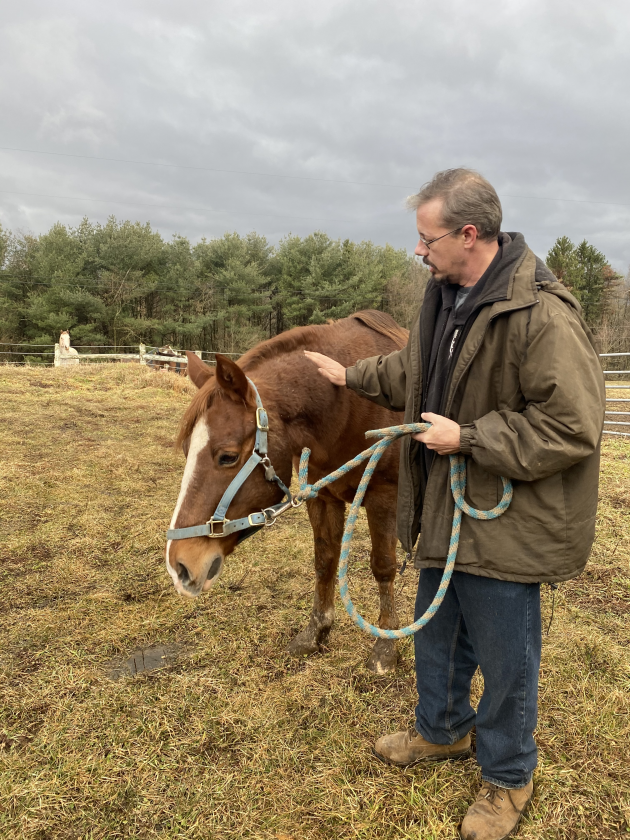 The program, pending 501(c)(3) non-profit status, is called Heroes Helping Horses/Horses Healing Heroes (6H) and has been something owner Robert Schnars has wanted to do since he and LeeAnn Sickels purchased the property in 2017.

“We lose 22 veterans a day,” said Schnars, citing a statistic from the federal Department of Veterans Affairs.

He said he wouldn’t be surprised if only about half of veterans who have suicidal thoughts or tendencies admit to it on their transition survey.

Schnars is former military himself, having served six years in the United States Marine Corp and 16 years in the Pennsylvania Army National Guard.

He says participants do not need to have an official diagnosis to participate in the program.

“I have never been officially diagnosed with PTSD, but all the signs are there,” said Schnars.

He says being around the animals helps, and that is why he wants to do this program.

The program will be based on the EAGALA (Equine Assisted Growth and Learning Association) model, which has a Military Services Designation specifically designed with the needs of service men and women and their families in mind.

“There’s only three in the state that are EAGALA certified and they are all down near Philadelphia, so we would cover all of north central Pennsylvania and western Pennsylvania,” said Schnars.

Equine Assisted Psychotherapy allows participants to interact with the horses on the ground under the guidance of a mental health professional who can help them relate their interactions with the horses to what is happening in their daily lives.

In order to become EAGALA certified, the program must have an equine specialist, which they already have in Sickels, and a licensed psychologist on staff.

They are currently searching for a psychologist who would likely start out in a volunteer capacity and hopefully turn into a paid position.

Schnars said they are always interested in potential volunteers and they would not require any special training or certification.

Schnars has already applied for a grant through the Veterans Trust Fund and is applying for a mental health grant early this year. He is reaching out to potential ambassadors in the horse world who can help get the word out by wearing their logo and talking about the program.

Miss Rodeo North Carolina has already agreed to be an ambassador and Miss Rodeo Pennsylvania recently reached out to Schnars as well, he said.

Schnars is beginning to contact local organizations looking for people in need of the program.

“I have sent letters to every VFW in the county,” said Schnars.

The program will be free for all veterans, first responders and law enforcement and may be covered by insurance for anyone else who would be interested in participating in the program with the proper documentation from a physician.

Private donations are also welcome and Schnars has started a GoFundMe page.

If anyone local would like to donate, they can reach out to Schnars directly through the Facebook page, by phone, or they are welcome to come up to the stables, he said.

In addition to the program, Schnars and Sickels plan to rescue an additional 15 horses to add to the nine rescued animals on the property they already own. Elysian Fields is situated on 40 acres of land and has a 14,000 square foot indoor arena, the largest in the county.

Schnars is kicking off the program by hosting a get-together on the 22nd of each month, beginning Tuesday, for veterans, first responders and members of law enforcement.

The date he chose was no accident, as it pays homage to the 22 veterans who die by suicide each day.

“This is an opportunity to get together and spend some time with the animals,” said Schnars.

More information about 6H can be found on the Elysian Fields Equestrian Center Facebook Page. Rob Schnars can be reached at 570-975-4991.