The State Industrial Home for Women at Muncy; Reforming Pennsylvania women in the early 1900s 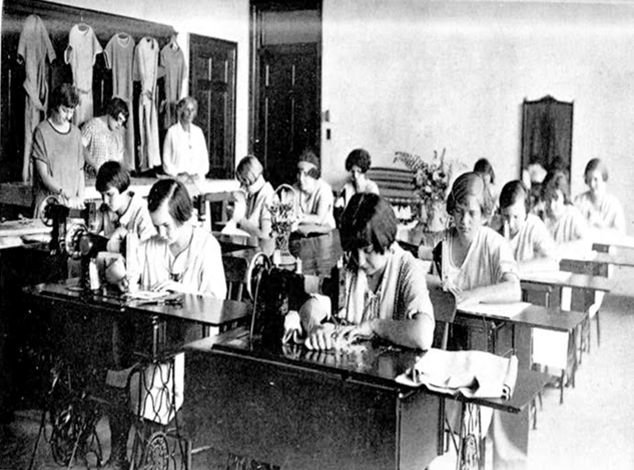 This article expands upon the Oct. 11, 2015, article by Greg Renn in this column on the State Industrial Home for Women at Muncy. With funding from the Andrew W. Mellon Foundation, Lycoming College student Reilly Groder ’17 and Professor Kerry Richmond compiled and analyzed the records of over 3,000 women who were incarcerated at the institution. This information, along with other newly uncovered documents from the institution, allows for a more comprehensive understanding of the role of the institution in reforming women during the early 20th century. Early scrapbooks kept by prison staff and photographs from the early years have been digitized and are available in the Lycoming County Women’s History Collection at www.lycoming.edu/orgs/lcwhc.

On Oct. 18, 1920, the State Industrial Home for Women at Muncy, Pennsylvania’s first and only women’s reformatory, admitted its first female inmate, Viola L. Viola, 24, had been convicted of prostitution and disorderly conduct. After 10 months at Muncy, she was granted parole, with the Board of Trustees stating, “She has made quite a good record for herself at the institution, seems quiet, has been obedient and it is believed that if started right, she will now make good, even if necessary, to earn her own living. She has taken an interest in the housework and is competent to work as a domestic.”

Viola represents the type of woman who was sentenced to Muncy in its early years. The State Industrial Home for Women was established for the commitment of females between the ages of 16 and 30 who were convicted of misdemeanor or criminal offenses, with the goal of “preventing young offenders from becoming hardened criminals by subjecting them to such preventive treatment as will be conducive to their mental and moral improvement.” By 1925, any woman who was convicted of an offense punishable by a year or more of incarceration was sent to Muncy.

Similar to a fine girls’ school

During its tenure as a reformatory, Muncy was highly regarded, with a reputation for being more similar to a fine girls’ school than to a penal institution. In the early years, the women who were sent to Muncy were overwhelmingly white and single, and more than half were first-time offenders. Women were commonly sent to Muncy for offenses against chastity, such as being promiscuous or incorrigible, along with larceny. In addition, almost half of the women housed at Muncy during this time were classified as “definitely feeble-minded” (with a mental age of 7 to 11 years).

Muncy’s role was to provide a domestic atmosphere for these women who, due to poor parenting, a negative environment or a low mental capacity, were unruly or were perceived as being beyond reform. The goal was to remove these women from the corrupting influences of their lives, expose them to the fresh country air and teach them how to become and appreciate being a woman so that, upon release, they would conform to social norms.

Not all of the women who were sent to Muncy were amenable to the treatment provided by the institution. During the 1920s, 15% of the women sentenced to Muncy, the majority of whom had been convicted of a sexual offense, were ultimately transferred to the Laurelton Village for Feeble-Minded Women of Child-Bearing Age in Hartley Township (Union County, PA). Laurelton Village was opened and then expanded in conjunction with the State Industrial Home for Women, and the combined role of the institutions was to address the perceived issue of women’s criminality in the state.

At the time, sexual deviance was believed to be an indicator of feeble-mindedness. However, because intelligence testing was still in a primitive stage, women who simply did not conform to societal gender norms often fell under this categorization.

Most of the women who were sentenced to Muncy were serving indeterminate sentences, typically up to three years, and often they were eligible for parole after serving 18 months at the institution. Almost half of the women at Muncy were released on parole. Success while on parole was not defined by whether a woman was able to refrain from engaging in criminal activity. In fact, the superintendent of Muncy, Miss Franklin Wilson, is quoted as saying, “We have never interpreted parole along the lines set down by the state — namely that a person on parole must be convicted of another crime before they can be adjudged a parole violator. Our parole has always been a personal matter; we expect the girls to live decently and honestly — idleness and sex-delinquency will not be tolerated.”

Women who could not abide by these norms were returned to Muncy. Interestingly enough, most women did not violate their parole by committing a new crime; instead, the most common reason for return was that a woman ran away from her place of employment.

Wilson often stated, with pride, that more than half of the women who left Muncy went on to get married within a year of release. Other women became housemaids or nursemaids or worked as store clerks. As a result of this success, Muncy, along with other women’s reformatories of the time, was characterized as one of the best and most progressive penal institutions in the country. The institution, in many ways, did have progressive ideas on how to address female criminality and recognized that women must be treated differently from men.

However, reformatories such as Muncy ultimately served as institutions for women who were not living up to a specific standard of femininity prevalent at the time and, as a result, treated women as if they were children who needed to be cared for. Instead of working toward improving the circumstances of women’s lives, reformatories often functioned as a form of gender social control, a legacy that remains to this day.

— Dr. Kerry Richmond is an Assistant Professor of Criminal Justice-Criminology at Lycoming College. She teaches courses on criminological theory, race, class, gender and crime and correctional policy. Her primary research interests focus on the effectiveness of correctional programming to promote the reintegration of offenders, specifically females.