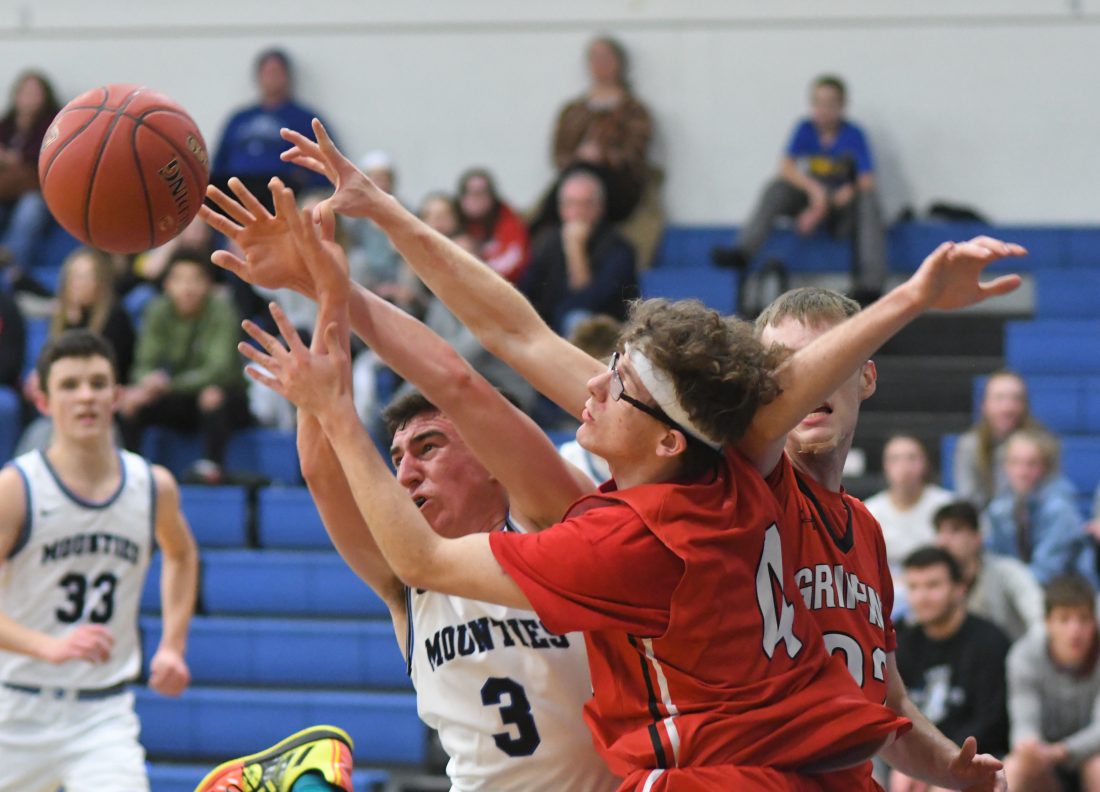 RALPH WILSON/Sun-Gazette Correspondent Sulllivan County’s Alex Schweitzer (4) reaches for a rebound along with South Williamsport’s Ethan Laudenslager (3) during the first quarter of a high school boy’s basketball game on Monday in South Williamsport.

Nobody ever really stopped South Williamsport point guard Ethan Laudenslager on Monday night. But Alex Schweitzer at least slowed him down.

After Laudenslager ravaged visiting Sullivan County throughout the third quarter, Schweitzer guarded him in the fourth and made him earn his final six points the hard way. Schweitzer’s defense as well as his clutch go-ahead 3-pointer and late free throws provided the Griffins just the spark they needed as they defeated South, 61-53. Schweitzer’s 3-pointer at the 6 minute, 40-second mark erased South’s final lead and his free throws with 33 seconds left made it 59-53.

Schweitzer is the classic hard-nosed player who flies under the radar, but who does all the little things critical to winning. But last night, the junior forward stepped out of the shadows.

“Coach (Glenn Vaughan) normally puts me on guys like that and I never back down,” Schweitzer said. “I like to try and boost the energy a lot. If you can stop a player from scoring you can provide a spark to the whole team.”

Schweitzer did not stop Laudenslager, but his ability to limit his relentless penetration paid big dividends. Laudenslager scored a career-high 24 points and had a hand in 19 of 23 Mountie third-quarter points, helping South cut an 11-point halftime deficit to 41-39 entering the fourth. Laudenslager scored six fourth-quarter points, but was 2 for 8 from the field during that time as Schweitzer contained a player intent on willing his team to victory.

A 5-foot-10 first-time starter, Schweitzer can guard multiple positions. He is tall enough to defend inside and quick enough to stick with guards. That combination paid big dividends as Sullivan (9-3) opened a six-point lead midway through the fourth quarter and did not let South pull closer than three again.

Schweitzer keyed the game-changing 9-2 run after Trent Hampton’s 3-pointer put South up, 42-41. A player once known labeled as simply an elite defender showed how far his all-around game has come, draining a 3-pointer. He added three of his key seven rebounds over the final six minutes, dealt three assists and scored five of his seven points at crucial times.

“I’m a lot better on the offensive side now,” Schweitzer said. “The game is slowing down. On the defensive side, I keep shelling out there.”

“Alex has gotten so much better offensively over the years and he never gives less than 100 percent,” Vaughan said. “He brings it every single night and if every player you ever coach did that you would have a heck of a coaching career.”

Laudenslager plays with the same Energizer Bunny-like motor that Schweitzer does and took over the game in the third quarter when he scored 12 points and dealt three assists. The senior captain is the lone starter back from last year’s District 4 Class AA semifinalist and made seven of eight shots from the field and the line in that third quarter. He finished with 10 rebounds and six assists, nearly lifting his young team to a big win against an eight-time state tournament qualifier last decade.

“He’s something else. He has the total game,” South coach Rob Houseknecht said. “He is our captain for a reason. Through these tough games he’s trying to will us through them.”

South (3-8) has lost several close games against likely playoff teams, but also has quality wins against District 4 Class AA title contenders Millville and Canton. The potential is there for this young team and it showed throughout the second-half comeback. Laudenslager lit the fuse but players like Nate Persun (10 points) and Lee Habalar (10) also made strong impacts as did Hampton who drained two fourth-quarter 3-pointers, his second one pulling South within 52-49 at the three-minute mark.

Ultimately, South’s second-quarter struggles might have doomed the Mounties. South made just 1 of 8 shots during that quarter and was outscored 13-2 as Sullivan built an 11-point lead. It was another learning experience for a team which is growing better if even if the record might not reflect it.

“Sometimes have to get on them a little bit, but they will work their butts off,” Houseknecht said. “They work every day coming to practice and it shows. They don’t give up and they fought hard to come back.”

Sullivan has delivered in high-pressure moments in two straight wins against defending district champion Millville and South. It was a strong collective effort throughout the fourth quarter with six Griffins scoring. Sam Carpenter (13 points, 4 assists) drained five free throws, Justin Metzger (12 points, 7 rebounds hit a key 3-pointer during the 9-2 surge and Jesse Williams (12 points, 5 rebounds) answered a South basket with one of his own, making it 48-44.

Omar Rubio and Gehrett Parrish provided production off the bench and Rubio scored four fourth-quarter points. Parrish was a difference-maker in the the second quarter when he pulled down four of his five rebounds.

“The nice thing is we’re able to win these two close games against very good opponents in Millville and South Williamsport and there also are glaring five-minute situations during the games where I can say what is going on?” Vaughan said.